Last week, we listed four top shows that made an impact with their storyline and asked you to pick your favourite one. The results are here and Shaheer Sheikh-Rhea Sharma's Yeh Rishtey Hain Pyaar Ke has emerged as the best TV show of 2019's first quarter, with a lion's share of 40 per cent votes. Also Read - Anil Kapoor is overwhelmed on winning the Best Jodi poll with Madhuri Dixit, thanks fans for 'all the love' over 33 years 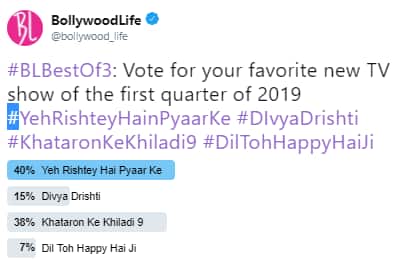 While Yeh Rishtey Hain Pyaar Ke bagged 40 per cent of votes, here's the figure that other shows scored.

Right from their costumes to story and characters, the show has created an ample amount of buzz yet, it garnered only 15 per cent votes from. For the ones who are not following this show, it revolves around the life of Divya and Drishti, two sisters who were separated at a young age. While Drishti has the ability to see the future, Divya, on the other hand, has the power to change it.

Based in Amritsar, Dil Toh Happy Hai Ji is a heart-warming tale of a free-spirited girl with dreams in her eyes and positivity that's contagious. The serial features Jasmin Bhasin in the lead, and garnered only 7 per cent votes from the Twitter users.

That's about it for the first quarter of 2019. Keep watching more programmes and let us know your thoughts about it, Tweet to us @bollywood_life