Yuvraj Singh and Hazel Keech blessed with a baby boy; grandfather Yograj Singh wants him to become a cricketer just like dad

Yuvraj Singh and Hazel Keech pleasantly surprised their fans by sharing the happiest news of their life that they have been blessed with a baby boy and have become a new parent.

Yuvraj Singh and Hazel Keech pleasantly surprised their fans by sharing the happiest news of their life that they have been blessed with a baby boy and have become a new parent. While announcing this news they even requested privacy. " To all our fans, family and friends, We are elated to share that today god blessed us with a baby boy. We thank god for this blessing and wish you to respect our privacy as we welcome the little one into the world. Love, Hazel and Yuvraj." Ever since the news is out, fans are celebrating and congratulating their cricket legend and his wife/Bollywood actress Hazel Keech. Also Read - Laal Singh Chaddha: Trailer of Aamir Khan-Kareena Kapoor Khan starrer to be out on THIS date

Not only fans even Bollywood celebs like Ayushmann Khurrana, Bipasha Basu, Preity Zinta, Angad Bedi, Neha Dhupa, cricketers like Irfan Pathan, VVS Laxman, Saina Nehwal, Sourav Ganguly and others showered their love for the newborn. While Yuvi's father and the newborn's grandfather Yograj Singh wished his son all the love and referred to the newborn as 'champ' Yurvraj immediately replied to his comment saying, " Hello grandad! Sidha nets vich lejaye (Straight to net practice).” To which he agreed and said, that the legacy must go one". Indeed the grandfather wants his grandson to become a cricketer just like dad. Also Read - Shehnaaz Gill steals the thunder at Giorgia Andriani's birthday bash; interacts with Arbaaz Khan 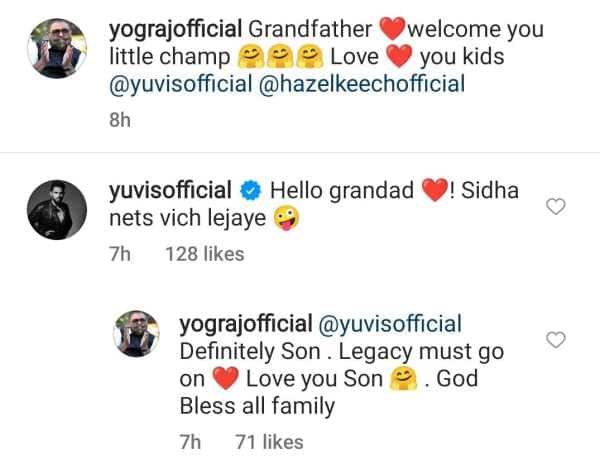 Also Read - The Devotion of Suspect X: Kareena Kapoor Khan glows in leaked pics from the sets in Darjeeling

Yuvraj Singh has been an all-rounder for India, he has won the man of the series award in the 2011 World Cup. Later in 2019 he announced his retirement from all forms of cricket. While Hazel too has done limited work in Bollywood, she was seen in Bodyguard along with Salman Khan and Kareena Kapoor Khan.