Zero BEATS Thugs of Hindostan, 2.0 and Simmba to be the most awaited film of the year - view poll results

Check out the results inside..

The makers of Aamir Khan starrer Thugs Of Hindostan dropped the release date of the film this week (November 8) and it got us excited as we will be witnessing the fight between many big budget films this year which include Simmba, Zero and 2.0. All of the films have A listers and hence the battle to win at the box office gets more intense. In a bid to know audience's favourite movie among these four films, we ran a poll a few days back and the results of the same are here. There was close competition between Aamir Khan's Thugs Of Hindostan and Shah Rukh Khan's Zero. Though, with a good margin Zero won the race, which suggests that people are most excited about Aanad L Rai's directorial out of all.

2.0, Simmba, Zero or Thugs of Hindostan: Which upcoming movie are you more excited about? - vote now

Also Read - Happy Birthday, Rajinikanth! 13 iconic dialogues of Thalaivar that are etched in our mind

Ranveer Singh's Simmba lost the race and Rajinikanth's 2.0 too received less votes. Check out the results right here: Also Read - Amy Jackson shares an adorable of video of son Andreas saying Hi to world and it's too cute for words 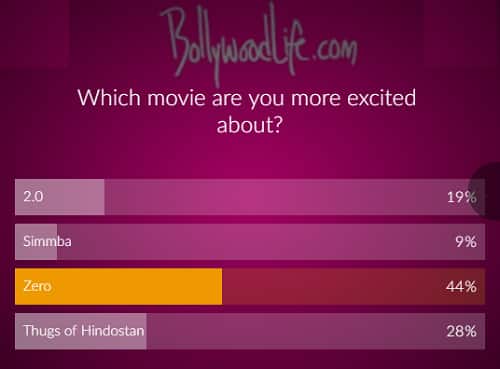 Bankrolled by Red Chillies Entertainment, Zero features Shah Rukh Khan, Katrina Kaif and Anushka Sharma in leading roles. The film has many guest appearances. SRK will be seen in a double role, one of which is that of a dwarf, whereas Katrina plays his love interest. The film is scheduled to release on December 21, 2018. On the other hand, Aamir Khan's Thugs Of Hindostan is based on the 1839 novel Confessions of a Thug written by Philip Meadows Taylor. The film is backed by Yash Raj Films and features Katrina Kaif, Fatima Sana Shaikh and Amitabh Bachchan. It is set to release on November 8, 2018.

Talking about 2.0, it is being directed by Shankar and has Rajnikanth playing the role of Chitti and Akshay Kumar as a crow man. It is scheduled to release on November 29, 2018. Whereas Rohit Shetty's directorial Simmba featuring Ranveer Singh and Saif Ali Khan's daughter Sara, will hit the silver screens on December 28, 2018.