Arnold Schwarzenegger is NOT dead; death hoax takes over Twitter by storm!

While Twitter was filled with condolences from fans, the Hollywood actor - politician's death news turned out to be a hoax

The rumours started after the Los Angeles Police Department received a 911 call about an "unresponsive male" from his house. Although the rumours were soon put to rest, the Schwarzenegger's fans had already posted their condolences on Twitter. Also Read - Iron Mask trailer: Jackie Chan and Arnold Schwarzenegger's epic face-off promises to be a visual treat for all action movie lovers

When people said "we never want to look like you" @Schwarzenegger replied : Don't worry, you never will. #gymaholic #RIPArnold :(

Everyone sighed a relief only after Australian body builder Calum von Moger confirmed on his Facebook page that the actor was very much alive and his death was fake news. 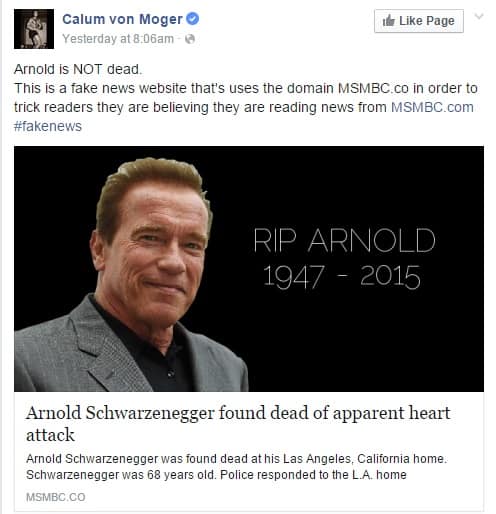 While fans could not have been happier about the news being wrong they also managed to make fun of it.

Early morning got shocked by news "Arnold Schwarzenegger dead" then relaxed after finding out it's a hoax, does this mean he cheated death??

Disturbing to google Arnold Schwarzenegger and find his dead as the top hit. You're all right @Schwarzenegger? pic.twitter.com/CQfXILb2Ic

Within the last 12 hours, James Earl Jones, Arnold Schwarzenegger, and Jake Lloyd have been 'reported' as dead... Internet... STOP IT!!!

This is not the first time though that an actor or celebrity has been called dead. Earlier, celebrities like Robert Pattinson, Jackie Chan, Adele, Justin Bieber, Lady Gaga and many more have fallen victim to these hoaxes.