Mouni Roy and Adaa Khan from Naagin, Siddharth Nigam from Chakravartin Ashok Samrat, Eisha Singh from Ishq Ka Rang Safed and Sana Sheikh from Krishnadasi came on Krushna Abhishek's Comedy Nights Live and they litrerally brought the house down with their masti...

If you missed today's episode, then don't worry as we have all the highlights from the popular show...

Comedy Nights Live is one of the most hilarious shows on TV and today again the show made us ROFTL. Today Mouni Roy and Adaa Khan from Naagin, Siddharth Nigam from Chakravartin Ashok Samrat, Eisha Singh from Ishq Ka Rang Safed and Sana Sheikh from Krishnadasi appeared on the show and we have to say that theyliterally brought the mad house down. If you happened to miss the episode, don't worry as we have got you all covered. Here are all the highlights from the comedy show: Also Read - Hina Khan, Rubina Dilaik and more: Top TV actresses who have the best bikini and monokini collection ever [VIEW PICS]

# The show started with Krushna Abhishek calling a bank agent to sanction him a loan. However, with no family member, he calls out his friends to help him get the loan. He tells them to be his fake family and a few hilarious moments later, the bank agent agrees to give him the loan. That's when the agent gets a call and he reports that a fraud case against a fake family had put them behind bars. Chintu and Krushna's father reveal their identity to the agent and tell him that Krushna had tricked them into this mess. Krushna becomes sad that his loan will not be sanctioned, but a new twist stuns them all. The agent was in fact a person who was looking for a fake family to get his loan sanctioned too. Krushna throws him out of the house and continues with his routine. Also Read - Sidharth Shukla, Mouni Roy, Kapil Sharma and more TV actors who hit headlines for throwing starry tantrums

# He reveals to Mika Singh that he had planned to get Hollywood celebrities with th loan, but now it won't be possible. Mike tells him not to be disheartened and suggests that he should call Bollywood actors instead. Krushna laughs and says, "Where do they come without money?" Also Read - Hina Khan gets culture shamed again for posting pics in monokini; netizens say, 'Aapke kapde dekhne ke baad...'

# He then mentions that while he was walking on the road, he spotted a cow who asked him to take it to the show, but he disagreed. Then a mouse begged him, but he again disagreed. Then 2 Naagins (snakes) asked him if they could come on the show and he could not refuse.

# That's when Mouni Roy (Shivanya) and Adaa Khan (Seesha) appear on the stage. They hug Krushna and he is stunned. When Mika asks him why he was stunned, he says that he was stunned how come the Naagins hugged him. Then he realised that the 2 litres milk that he made them drink helped.

# Krushna then asks how come they came to the show. Adaa replies, "We came through our talent. What about you?" The former laughs and says, "The snakes are biting."

# Later on he asks what they had to do to become the ichadari naagin that they are. Adaa replies that they have become so after 100 years of austerity (tapasaya). Krushna laughs and says that if they had studied for 15 years, they would have become good engineers.

# He also that if they are ichadari naagins and all their wishes are fulfilled if they want it, have they thought about achieving a raise? Both, Adaa and Mouni laugh and say no. 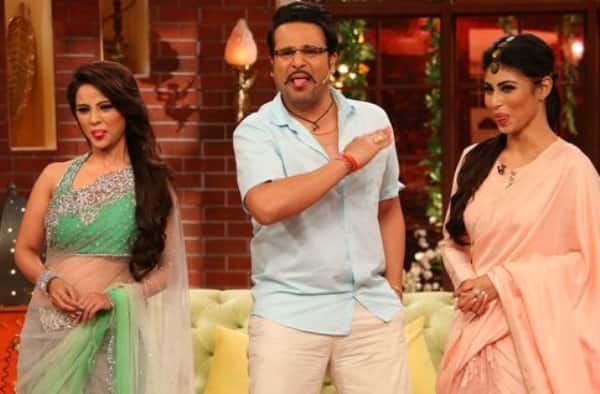 # Krushna Abhishek also tried to reveal Mouni Roy's relationship status. He asked her if she had a boyfriend and she just kept laughing. She just told that she will tell him about everything after the show. When he turned to Adaa, she said she doesn't want guys. Everyone was stunned and burst into laughter, that's when Mouni said that she means she doesn't want a guy right now.

# Later on Mouni and Adaa dance to the Naagin song and they truly sizzle. It is a very eye-catching performance, so much so that Mika Singh starts singing, "Gulaabi saree jo teri dekhi, sharaabi ye dil ho ho gaya." Krushna and Mouni dance to it and it FAB too. Krushna also makes us ROFL with his Naagin dance.

# As soon as Bharti (Chintu) enters, Krushna calls her an Ichadari bhains (buffalo). Chintu also turns the Naagins into Bakris and they have a laughter around it.

# A while later, Chakravartin Ashoka Samrat's Siddharth Nigam enters and as he is shirtless, Bharti asks why he was in such a hurry that he forgot to wear a shirt. Sid says that he has abs, while she has a body and so that's why he didn't wore a short and she did.

# Siddharth also fights of four warriors as he shows his action prowess on the stage as Bajirao Mastani's Malhari song plays in the background. He also shows a few stunts and when Chintu tries one of them, the floor shook and people fell.

# Ishq Ka Rang Safed's Eisha Singh (Dhani) also arrives and the bubbly girl is greeted warmly by everyone. They all speak about what her show is all about, after which Krushna takes a dig at Colors for hiring Siddharth and Eisha when they are just 16.

# Chintu makes Eisha milk a buffalo and she does it perfectly.

# Later on, the acting capabilities of actors were being tested. Krushna and Mouni had to enact a romantic scene and it looked perfect. Both of them did it with fukk conviction and it was amazing. Bharti and Adaa along with Krushna and Eisha also performed a few scenes and they were hilarious. 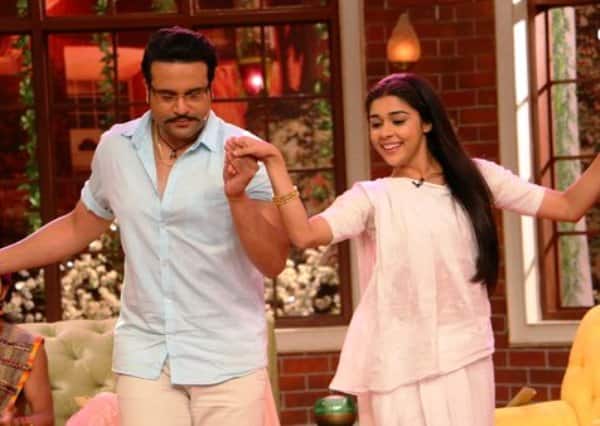 # Near to the end, Sana Sheikh from Krishnadasi also came on stage and cracked a few jokes.

# Chintu also said that they have one thing in common and that is they have the same producer. Krushna jokes and asks Sana how she is managing with the money and she just laughs.

# In the end, all the actors play a game, where they have tissue paper containers filled with balls. The actors have to shake their body and make the balls come out. Mouni completes it successfully first and wins. 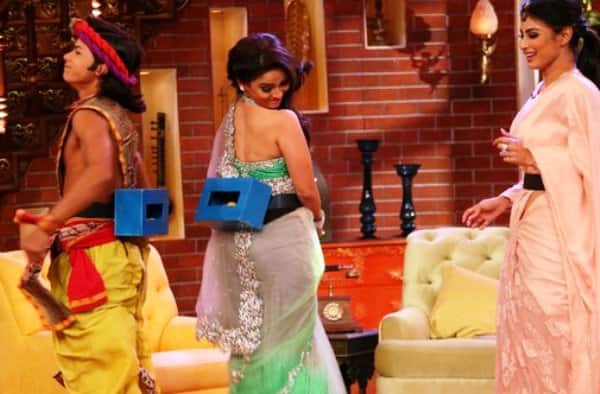 # They all dance, say their goodbyes and the show ends.

So this was tonight's episode of Comedy Nights Live! Did you enjoy? Tell us in the comments section below! Also check out the video promo of the episode here: