Yeh Rishta Kya Kehlata Hai actor Parul Chauhan broke the news of her marriage with actor Chirag Thakkar, which came as a shocker to many. Not many were aware of Chauhan’s relationship with the actor.The two will get married in her home town in Uttar Pradesh as the wedding is slated for December 12. The Bidaai actress shared a post on Instagram talking about her marriage. With a long caption, she narrated her love for her companion. “I have found unconditional love for friendship and you will be my closest truest friend forever,” she wrote. The actress also added that she is lucky to choose her best friend for marriage. Check out her post. Also Read - Bidaai actress Sara Khan visits her hometown Bhopal after 10 years; reunites with her grandmom — view pics

I believe marriage is lifelong commitment and friendship is a life long engagement .! Chirag, Every single day i spent being your friend , I realise how lucky i am to live such a amazing life.!! By choosing best friend for marriage , i chose happiness for life .! You are the best thing happened to me.! Thank you very much to Rajan sir who always treats me me like his daughter and being always my mentor and family..! Thank you my family and friends and fans for unconditional love ?❤? Chirag i have no words to explain but onething i would like to tell you that , in you i have found unconditional love for friendship and you will be my closest truest friend forever❤ #weddingbells #amazinglife #soexcited #happyme #becauselifeisbeautiful

Many co-actors of Chauhan took no time to start sharing their excitement for her upcoming wedding. Many congratulated the actress, however, what caught our attention the most was her on screen sister Sara Khan’s comment. Khan played Chauhan’s on screen sister in their debut daily Bidaai. Also Read - Nia Sharma, Jasmin Bhasin, Sanjeeda Sheikh – 9 TV actresses who can give Mouni Roy’s ‘Patli Kamariya’ tough competition

Sara left a comment, “I need to decide what to wear man so much to do (emojis) super excited.” Well, that just sounded like a real sister talking, didn’t it? Her comment took us to the days when the duo played siblings on screen. As this is exactly how sibling love is. Also Read - Kuch Rang Pyaar Ke Aise Bhi, Qubool Hai, Mahabharat, Bigg Boss – 24 shows who hit jackpot abroad – view pics 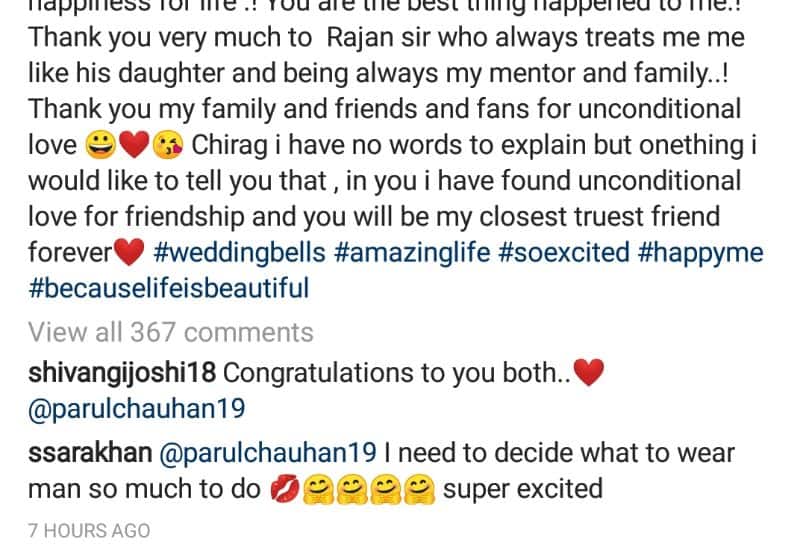 Didn’t this remind you of Bidaai days? Don’t you think the two actresses should reunite on screen soon? We do.