Avatar The Way Of Water Movie Review: James Cameron fantasy is worth the wait with its sublime visuals that will leave you in awe

Avatar: The Way Of Water Review: James Cameron is back with the sequel 13 years after the first film. Loaded with superlative unbelievable visuals, this is big screen movie watching at its finest. But the story is too predictable and lacks drama 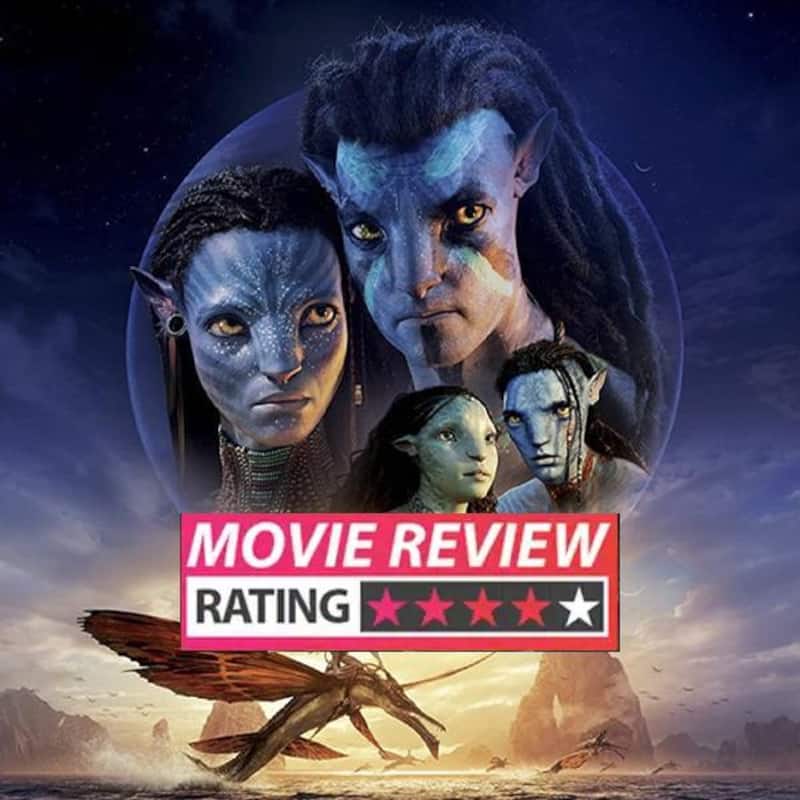 After a wait of 13 long years, Avatar: The Way Of Water (Avatar 2) has finally hit the marquee. The movie would have come a bit earlier but the pandemic pushed it by a couple of years. It would not be wrong to say that the original Avatar is an emotion for many. The cinematic masterpiece that took us to the imaginary land of Pandora gave us visuals that stayed on in our minds long after we left the theatres. Avatar: The Way Of Water is made on a budget of USD 350 million. By estimates, it should gross over USD two billion to be certified as a truly profitable venture. This time, we are transported from the forests of Pandora to the mighty seas of the earth-like plant. Jake Sully (Sam Worthington) and Ney'tiri (Zoe Saldana) are parents of four living a blissful family life till the humans return again to invade Pandora. We are sure millions will watch Avatar: The Way Of Water because it is a film you just cannot miss. But here is our review to prep you up just a little bit. Also Read - Akshay Kumar politely stops fans from taking pictures of his daughter Nitara as they step out after watching Avatar 2 [View Pics]

What's it about?
Jake Sully and Ney'tiri are happily raising four kids in Pandora. The film focuses on the different temperaments of their kids especially Loak (Britain Dalton) who is the rebel. The bliss is short-lived as the sky people return. This time, the US marines have come in the form of avatars with their strengths and skills. Sully and his family seek refuge with the Metkayina clan. They live by the sea in harmony with the aquatic universe. But Colonel Quatrich and his men are relentless. Will Jake Sully manage to save his family and the Na'Vi land from invasion? Also Read - Avatar: The Way of Water Box Office Collection Day 2: James Cameron's film sees a small growth on Saturday; inches closer to Rs 100 crores

What's hot...
Visuals, visuals and more visuals. The hottest thing about Avatar: The Way Of Water is the imagination of James Cameron and his team that brought it to life. The 3D effects are a joy to watch. If you loved the fairy tale vibe of Pandora, then the underwater seas of Metkayina are something else together. At times, you will feel that you are right in the midst of the wondrous creatures that includes a gigantic version of what seems like a hammerhead shark. Talking of characters, the film belongs to Loak more than Jake Sully. As the rebel, he brings the right amount of emotion. His friendship with Payakan, a rogue tulkun is one of the biggest highlights of the film. Stephen Lang as Colonel Quatrich is the perfect baddie. Kate Winslet is seen as Ronal while Cliff Curtis is Tonowari, the leaders of Metkayina. The action at the end is truly spectacular. From the boat chasing the tulkun to the kidnapping and hand combat underwater, you'll be glued on it every second. The cinematography is top-notch.

What's not...
The biggest disappointment is the story. Well, even Avatar did not have much of a plot but the drama was intact. Here, there are hardly any elevated moments except a couple towards the end. The dialogues are also very pedestrian failing to stir any kind of emotion. Some of the scenes between the adolescents of Forest and Sea people are quite funny. It is hard to imagine that the movie has five writers. At over three hours some may find it too lengthy but the visuals compensate for it.

BL Verdict
Avatar: The Way Of Water will make you salute James Cameron and his vision. You will want to bow down in front of the technical and digital team that creates such marvelous filmmaking. Those looking for a story might be a bit disappointed. But Avatar 2 is modern filmmaking at its best and should not be missed on the big screen.