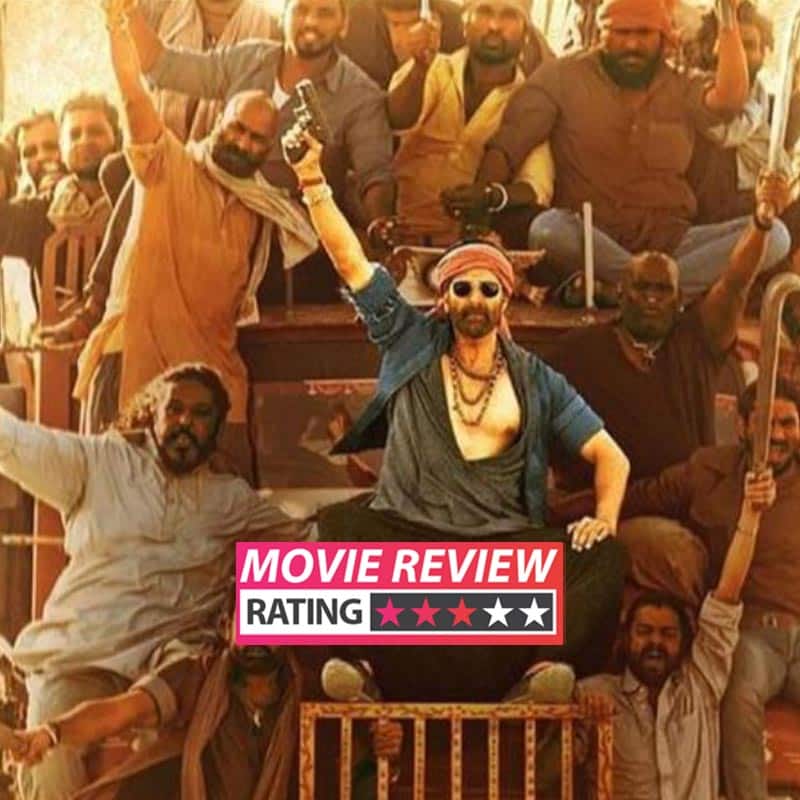 After a producer rejects her script, Myra Devekar (Kriti Sanon) reaches Bhagwa to make a film on notorious gangster Bachchhan Paandey (Akshay Kumar) with local resident and her industry buddy, Vishu (Arshad Warsi), for company. No prizes for guessing that it turns out to be a far rougher ride that she had imagined. Also Read - Shah Rukh Khan, Disha Patani, Ranveer Singh and more: Bollywood actors and their lesser-known siblings

Watch the Bachchhan Paandey trailer below:

First things first, Bachchhan Paandey has enough going for it to entertain both those who've watched the 2014 Tamil original, Jigarthanda, as well as first-time viewers. Second things second, it's a paisa-vasool treat (at least till the interval point for now) for Akshay Kumar fans as the actor takes on his coolest role since 2012's Rowdy Rathore, and goes no-holds-barred with his swag while also subtly reminding discerning movie-buffs what a fine actor he is with his diction and body language. Kriti Sanon, too, add another meaty role and credible performance to her enviably growing repertoire while Arshad Warsi, as always, doesn't surprise us one bit with his effortless coming timing. Jacqueline Fernandez, Pankaj Tripathi, Abhimanyu Singh, Saharsh Kumar Shukla, Sanjay Mishra and Prateik Babbar are all also on the money.

The dialogues are a hoot, more so in the first half, and some smart changes have been infused to ensure Bachchhan Paandey retains the essence of its source material while forging its own identity, which is always a tough job for remakes, so kudos to the makers for that – the deviation from the serious tone to a dark comedy is more than welcome, particularly for the family audience during a festive release, as is the added backstory. Keeping the infectious background score though was a good choice. Charu Shree Roy's editing keeps the narrative snappy, Gavemic U. Ary's camerawork captures the rustic flavour to the T and the production values are as polished as one would expect from a Sajid Nadiadwala production. Two songs, Saare Bolo Bewafa and Meri Jaan, also stand out.

For a gangster movie, there's a distinct lack of action scenes or even some remotely deadly sequences, which is a glaring issue since the Bachchhan Paandey had clearly promised the same. Moreover, while funny, there was scope for more humour, with several of the punchlines and comic scenarios falling flat in the second half, which is also when the screenplay and direction both take a hit. Remove Pankaj Tripathi from the second half and there's nothing to take home. Also, when Farhad Samji, Sahid Nadiadwala and their co-writers had incorporated certain refreshing changes in their adaptation, why not change the climax, which is one of the weakest aspect of Jigarthanda?

Bachchhan Paandey is a paisa-vasool treat for Akshay Kumar fans as the actor is in full 'Rowdy Rathore' mode, going no-holds-barred with his swag while also subtly reminding us what a fine actor he is with his diction and body language. Kriti Sanon, Arshad Warsi, Pankaj Tripathi and the rest of the cast also have a blast, but the movie itself isn't as much of a Holi blast as the trailer had promised, especially for neutral viewers, with the second half taking a clear dip from a seriously good first half. The good news is though it retains the essence of the Tamil original, Jigarthanda, while doing more than enough to forge its own identity. I'm going with 3 out of 5 stars.