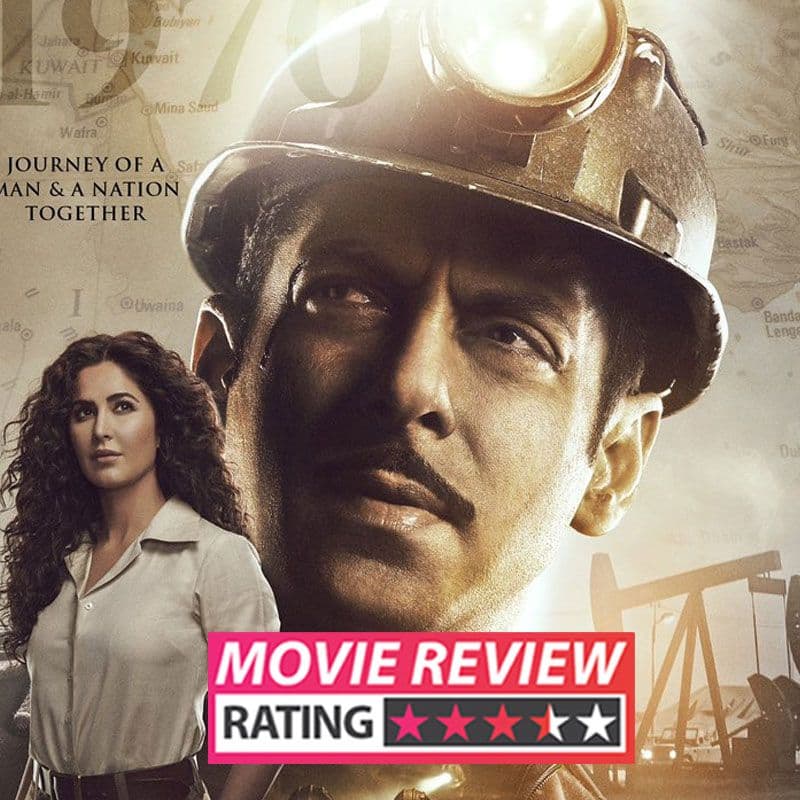 Today is the big day as Salman Khan and Katrina Kaif-starrer Bharat has arrived on the silver screen as a huge Eid treat to all the movie buffs. Yes, the most anticipated film of the year is here and how. The film which is directed by Ali Abbas Zafar has been in the news ever since it went on floors and thanks to Salman mania it has reached new heights. But before the numbers come crunching and you book your ticket, read our review of Bharat here... Also Read - Ranveer Singh-Deepika Padukone, Aamir Khan-Karisma Kapoor and more Bollywood stars who shared the hottest lip lock scenes [View Pics]

Poll Result: Here's what the audience will watch between Bharat and India vs South Africa World Cup match

No one loves being a hero more than Salman Khan. With Bharat he gets the biggest and most lavish canvas of his career to showcase his heroism across different ages. A remake of the Korean drama Ode to my father, Bharat is set against the backdrop of partition and narrates the story of a son (Salman Khan) who lives his life waiting to fulfill a promise made to his father (Jackie Shroff) during their brutal separation. The partition scene in the film where Bharat gets separated from his father is heartbreaking and showcases an event that changed the lives of families across borders. Narrated as a throwback story by an old Bharat, the film introduces to his world and the people he grows up to love and hate. In Bharat's world the one companion who stays with him till the very end is his childhood friend Vilayti (Sunil Grover) - a character that adds spunk and flavour to the film. Bharat's teenage years are spent in a circus as a stunt artist where he meets his first crush Radha (Disha Patni) only to leave her and make a life elsewhere when circumstances change. As the years clock numbers the story progresses and Bharat grows into a man from a boy, living his childhood promise and waiting for the day he unites with his father. Bharat's adulthood is spent in the Gulf where he works in the oil fields, this chapter of the story is devoted to his love story with Kumud (Katrina Kaif) who becomes his life long companion, oddly they aren't married ! While the first half shows us shades of Bharat's character and his values towards life, the second half gets more dramatic nearing a stretched climax at the Wagah border where families separated during partition get an unique opportunity to reunite. Does a 70 year old Bharat get to meet his father and sister ? The answer isn't that simple! Also Read - Alia Bhatt, a soft target for trolls? From Koffee with Karan blooper to pregnancy announcement - here's how Brahmastra star became the butt of all jokes

Bharat is all heart. The writing exudes emotions that connect with you on different levels. There is empathy, love, loss, anger, frustration and joy all shown through the different chapters if Bharat's life. Ali spends a lot of time on the writing which is why his protagonist works in making this story beleiveable. When you are the country's biggest superstar playing a 70 year old might seem daunting, but Ali and Salman crack this myth beautifully. The charm of a 70 year old grey and old Salman narrating his life story has a different appeal. Given the sheer magnitude of the canvas it paints, Bharat weaves interesting characters and has multiple moments and scenes that add up to its grand finale. While in Sultan his challenge was to show the physical transformation, in Bharat it's the mental strength and grit and determination that's at display. Salman goes all out to play the title role to his full potential. Very much aware of the pressures of pandering to his fandoms wishes he maintains a good balance between being a superhero and doing justice to his character. Katrina holds her ground against Salman and her introduction scene with him showcases her often under utilised light side. Their chemistry in the film is what makes it so realistic. Sunil Grover as Bharat's sidekick aces every scene. Known for his comic timing and versatility the actor leaves no stone unturned to make most of this opportunity. Bharat's camerawork is also a major highlight and the production values including everything from costumes to set decoration is in sync with the
genre.

Bharat is tediously long and has a climax that needed better editing. The challenge for Ali was to narrate a story that's entertaining and emotional at the same point. Caught between doing justice to a superstar and staying true to his narrative he gets over indulgent like a child refusing to part with his favourite toy. Bharat's journey from the point of separation to his final moment comes to a wobbly end because the story meanders and takes too long to reach the final act. While Chasni and Slow motion are catchy the music of Bharat needed some better melody. Also there is a national anthem moment in the film that feels like it was inserted for effect. Pace is a major issue for the film and it needed to pick up speed at many junctures.

Bharat delivers it's promise of being an emotional entertainer. Fans who want to see Salman reinvent his superstar image with a solid storyline will be pleased with Bharat.