An evil force is at work to bring together the three broken pieces of Brahmastra and awaken Dev who once tried to destroy the world. Only Shiva (Ranbir Kapoor_, an ordinary guy with latent, extraordinary secrets, can be the unwitting saviour 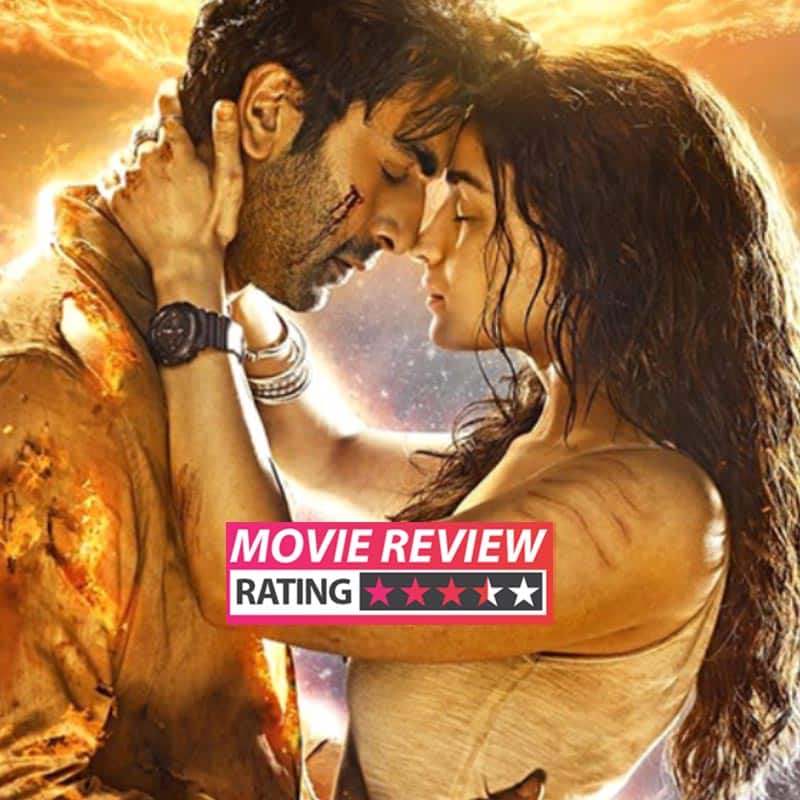 Movie: Brahmastra
Brahmastra cast: Ranbir Kapoor, Alia Bhatt, Mouni Roy, Amitabh Bachchan, Nagarjuna
Brahmastra Director: Ayan Mukerji
Where to Watch: In Theatres
Review by: Russel D'Silva
Bollywood hasn't had a great track record when it comes to fantasy movies. While sci-fi has surprisingly done well, with the Krrish franchise being the best example and Ra One also being a moderate success, Bollywood fantasy films right from Ajooba to Drona, Naksha or Jajantaram Mamantaram have regularly failed to impress both critics and the audience. Conversely, when it comes to films based on Hindi mythology, with a Naksha and Vaah Life Ho Toh Aisi being there for every OMG and Taqdeerwala. Now, along comes Ayan Mukerji directorial Brahmastra, backed to the fullest by producer Karan Johar which took 5 years to bring together all the above elements, promise a fictitious concoction like no other. So, does the Ranbir Kapoor and Alia Bhatt starrer turn out to be the vishal spectacle it has promised to all this time? The answer is an emphatic yes. So, are you excited about what to watch this weekend or what to watch this week and wondering whether Brahmastra is worth your time? Scroll down for my full Brahmastra movie review below... Also Read - Ankita Lokhande makes heads turn in a HOT yellow saree; fans cannot get over her sindoor [View Pics]

An evil force is at work to bring together the three broken pieces of Brahmastra and awaken Dev who once tried to destroy the world. Only Shiva, an ordinary guy with latent, extraordinary secrets, can be the unwitting saviour.\ Also Read - Ranbir Kapoor wants Alia Bhatt to get back to work soon after their baby; here’s why

Watch the Brahmastra trailer below: Also Read - From Jiah Khan to Mandana Karimi: Actresses who accused Bigg Boss 16 contestant Sajid Khan of sexual misconduct in the past

Brahmashtra is hands down the greatest visual spectacle till date in Indian Cinema, even bigger than SS Rajamouli's Baahubali and RRR. Three goosebump moments stand out – a chase scene, the interval block when Ranbir realises the full extent of his powers and the climax till the point Mouni Roy almost emerges victorious. This is 5 years of blood, sweat and sacrifice that has truly paid off. Knowing full that a Marvel-level budget isn't at their disposal, Ayan Mukerji and Karan Johar "marvellouslly" create a visual world that's striking despite its monetary limitations courtesy both hitherto the best usage of VFX in an Indian film and some stunning camerawork.

The plot and folklore is also well amalgamated with a modern tough sans sacrificing tradition so that all age groups can have a blast. Even the songs are shot very well and never hamper the flow of the narrative. As for the performances, Ranbir Kapoor shoulders the entire film while Amitabh Bachchan and Alia Bhatt are his able pillars, whereas Mouni Roy is the ideal foil, and Nagarjuna's cameo is intense. That being said, Shah Rukh Khan still steals the show in 15 minutes. Can't wait for #BrahmastraMovie part 2.

The dialogues are at times so juvenile that if they were even a little better, the film may have been nigh flawless. The romantic track is also a double-edged sword because as much as it's a catalyst for Ranbir's powers, it also drags the story down in quite a few places. And the climax was brilliant till the romantic angle hits again after Mouni's almost wins, but once again, a big transformation in Ranbir's avatar saves the day. I guess, credit goes to Ayan for always saving things just when you think they're about to sink. Prakash Kurup's editing could've also been tighter by at least 20-25 minutes.

The visual treat alone is worth the prove of admission for Brahmastra twice over. The dialogues and romance could've been streamlined, but the fantasy world and folklore that draw you in are enough to ensure that hardly anybody should walk out of the theatre saying that they didn't have a good time. I'm going with 3.5 out of 5 stars.