Duranga web series review: Gulshan Devaiah and Drashti Dhami are top notch in this layered thriller where we guess who's the psycho

A few plotholes and logical inconsistencies aside, Duranga on Zee5 is easily the first addictive, binge-worthy and extremely well done Indian web series on psychopaths and serial killers, capturing all their dark and devious quirks with copious layers and edge-of-the-seat suspense 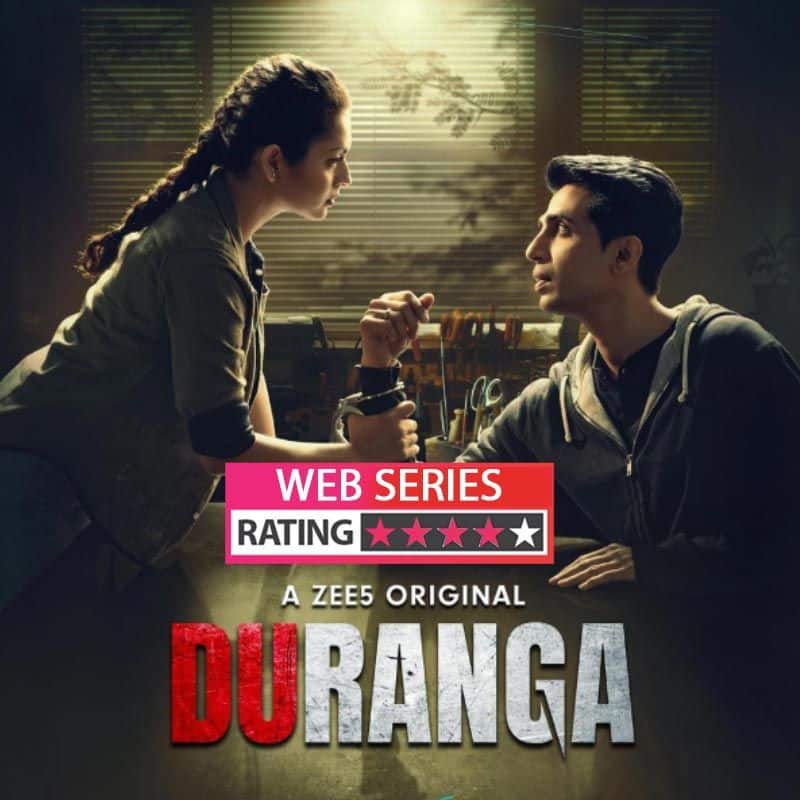 Web Series: Duranga
Duranga cast: Drashti Dhami, Gulshan Devaiah, Rajesh Khattar, Amit Sadh
Duranga Creator: Goldie Behl
Where to Watch: ZEE5
Review by: Russel D'Silva
Bollywood has had a rich history when it comes to portraying psychopaths on screen, with several classic like Darr, Deewangee, Kaun immediately springing to mind. However, when it comes to the industry's fairly new avenue of web series, the realms has yet to be explored. Well, the door to the OTT universe of said realms has now been opened in grand fashion by series creator Goldie Behl, who creates an dark and intriguing world with his Drashti Dhami and Gulshan Devaiah starrer, Duranga, on ZEE5. So, are you excited about what to watch this weekend or what to watch this week and wondering whether Duranga is worth your time? Scroll down for my full Duranga web series review... Also Read - Duranga: Drashti Dhami reveals why she did not watch the original Flower Of Evil [Exclusive]

Ira (Drashti Dhami), a top cop from Mumbai's crime branch, has built a happily married life with Samit Patel (Gulshan Devaiah), including sharing a kid, for the past 11 years unaware of his psychopathic urges and dark past about his serial killer father. When killings in the same MO of deceased father begin occurring again, you can't help but wonder if Samit's urges have resurfaced or is there another killer adopting the same style on the prowl? Also Read - Independence Day 2022 Azaadi Ka Amrit Mahotsav: Drashti Dhami reveals what 'Asli Azaadi' means to her [Exclusive]

Watch the Duranga trailer below:

Right off the bat, let me get one thing out of the way: Duranga is Gulshan Devaiah and Gulshan Devaiah is Duranga, who perfectly evokes the body language, mannerisms, lack of empathy and inability to emote of a psycho yet adds dollops of human subtexts to his character. He's brilliantly supported by Drashti Dhami as the unsuspecting wife who's world comes crashing down when she learns of his history while also trying to get to the bottom of a highly demanding case. The rest of the cast are also on the money while Goldie Behl delivers his best creative work in years and the icing on the cake is the late entry by Amit Sadh.

Though I haven't seen Flower of Evil, the K-drama this Zee5 series is based on, I can still state that it's a mighty good, Indianised adaptation, drawing you in with thrill, suspense, layers of human drama that are slowly peeled off and no small amount of pathos. The production value and camerawork are also pretty good as is the editing, keeping things snappy at 9 episodes of just about half an hour each. A word of the action choreography, too, with two chase sequences standing out.

As far as Goldie Behl has come as a creative influence, he still has a few miles to travel when it comes to avoiding the same glaring errors that've previously plagues his work, like plotholes, logical inconsistencies and scenes ending abruptly. Thankfully, they occur only few and far between in Duranga, but are still prominent enough to not be overlooked. A few narrative decisions also beg you to suspend disbelief, but you gladly do that since you're having such a good time.

A few plotholes and logical inconsistencies aside, Duranga on Zee5 is easily the first addictive, binge-worthy and extremely well done Indian web series on psychopaths and serial killers, capturing all their dark and devious quirks with copious layers and edge-of-the-seat suspense. I'm going with 4 out of 5 stars.