Heropanti 2 starring Tiger Shroff, Tara Sutaria, and Nawazuddin Siddiqui is all set to hit the big screens on 29th April 2022. The trailer and the songs of the movie have received a good response, and now, everyone is keen to know how the film will be. Umair Sandhu, who is a member of the overseas Censor Board, recently watched the film and took to social media to share his review of the film. Read on to know what he has to say about Ahmed Khan’s directorial… Also Read - Devoleena Bhattacharjee OPENS Up about a horrific incident that happened in same premises she lives in; says she is ‘terrified’

He shared on Instagram, “On the whole, Heropanti 2 is a typical masala entertainer which scores high on action and performances from Tiger Shroff & Nawazuddin Siddiqui. With focus on entertainment, the film is without a doubt, the best action film to come out of Bollywood in 2022. It has all the merits to hit the jackpot. At the box office, it will be lapped up by the masses on the account of its masala quotient. Tara Sutaria is totally miscast. She is irritating sometimes. Overall full on paisa vasool film. Masses will go gaga. 3.5 stars.” Also Read - After Panchayat 2 and Stranger Things 4, sequels of these popular web series are all set to entertain audience in 2022 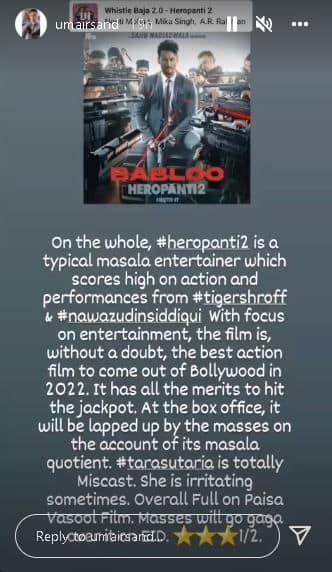 Well, Heropanti 2 won’t be getting a solo release. The movie will be clashing with Ajay Devgn, Amitabh Bachchan, and Rakul Preet Singh starrer Runway 34. The promotions of both the films are going on in full swing, so it will be interesting to see which film will win this box office race. However, let’s see if Runway 34 and Heropanti 2 will be able to sail through the storm of Yash starrer KGF: Chapter 2.