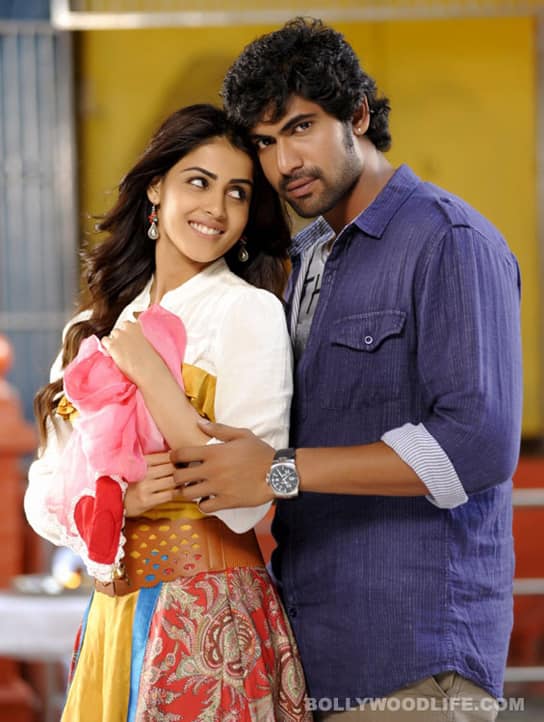 Naa Ishtam, which is Rana Daggubati's first full-length commercial film with fights and dances, suffers from the same inadequacies seen in big budget commercial Telugu films. It is made with all the regular masala elements

The film not only has a weak plot and an outdated story line, it is also a predictable and average fare. The film is another proof of mediocrity prevailing in the Telugu film industry, which is known for repeating tried and tested formulae. Young director Prakash Tholeti could have banked upon an innovative script for the film knowing Rana's talent. But Naa Ishtam does not move an inch from the set pattern of Telugu commercial potboilers. Also Read - Rana Daggubati, happy birthday!

Set in Malaysia, the story starts by introducing Ganesh (Rana Daggubati), a self-seeker. He will do anything to earn money. Krishnaveni (Genelia D'Souza), who is in love with Kishore (Harshavardhan Rane), elopes to Malaysia to meet her fiance, but does not find him there. A selfish Ganesh brings her back to India and hands her over to her father Naidu who does not approve his daughter's relationship with Kishore. Later Ganesh realises his mistake and takes Krishnaveni back to Malaysia. His action irks Naidu family and Kishore. Of course, his heroics are the final winner of this predictable story. Also Read - Genelia, Rana, Dhanush, Reemma: What were they doing this week?

It is bubbly Genelia who is the star of the show. Despite having a lesser space to perform, the young actor brightens up the screen whenever the camera focuses on her. Rana, who plays a larger than life hero, gets a lot of space to show his talent in the gymnastics and dancing. He is good in some comedy sequences as well. Brahmanandam's comedy is good, but Nassar's role suffers on account of weak characterisation. Harshavardhan impresses. Ali and Raghubabu bring in a few laughs. Also Read - Rana Daggubati and Genelia D'Souza in Naa Ishtam

Chakri's composition is good with some hummable songs already on charts. Cameraman Venkat Prasad's work is effective. Naa Ishtam is a regular commercial film, but its weak script hammers you down. Watch it if you have no other alternative.