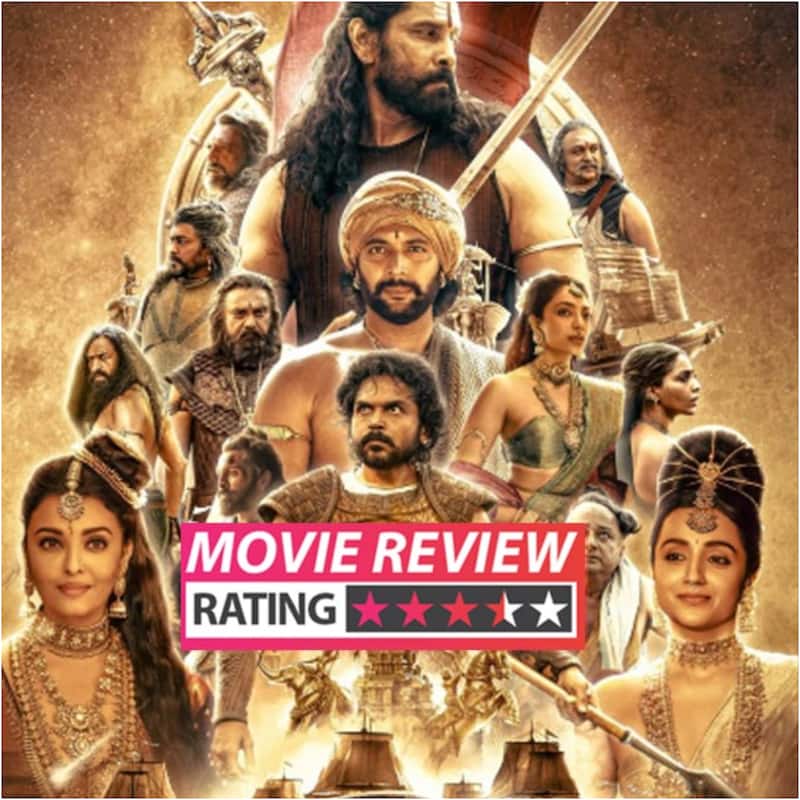 The much-awaited Ponniyin Selvan: Part 1 has hit the big screens today. The film stars Chiyaan Vikram, Jayam Ravi, Karthi, Aishwarya Rai Bachchan, and Trisha Krishnan in the lead roles. It is based on Kalki Krishnamurthy's 1955 novel Ponniyin Selvan, and tells the story of the Cholas. PS1 is one of the most awaited films, and moviegoers have been looking forward to it. So, is the wait worth it? Check out our Ponniyin Selvan movie review below... Also Read - Trending South News Today: Kriti Sanon reacts to Adipurush delay; Ponniyin Selvan 1 team has a reunion sans Aishwarya Rai Bachchan and more

What's it about? Also Read - Ponniyin Selvan I: Fans miss Aishwarya Rai Bachchan as Trisha Krishnan, Karthi, Vikram and others have a fun reunion

Aditya Karikalan (Vikram), the main man of the Chola dynasty is out in the war ground to defeat his opponents and win the dynasty. Vallavaraaya Vandeduvdu (Karthi) is sent to Thanjavur with a message to Sundara Chola (Prakash Raj) and Kundavai (Trisha). Vallavaraya is on a mission to find out what is happening against the Cholas.

Nandini (Aishwarya Rai), the Pazhuvoor queen and wife of Periya Pazhuvettaraiyar and Aditya Karikalan's love interest, has a master plan and a lot of things running in her mind.

Now what's the plan and what do all of them have against the Cholas has to be found out by Vallavaraya. Now it is time for Aditya Karikalan and Arunmozhli (Jayam Ravi) to save their dynasty. Basically, Ponniyin Selvan is a five-part historical fiction series based on the life of Arulmozhi Varman, who later became the great Chola emperor Rajaraja Chola I. This is woven a tale of the power struggle among the three popular Southern kingdoms—Cholar, Cheran, and Pandiyans—peppered with wit, story, and narrative.

Understanding Ponniyin Selvan is not everyone’s cup of tea. It is too huge to be told in three hours and that’s why there is going to be part two. Performances from lead actors Vikram, Jayam Ravi, Trisha, Aishwarya Rai and Karthi are fabulous. In fact, Karthi is the actual hero of the film. He has done a great job.

All these actors are experienced and professionals. So you really don’t have to talk about how they acted. It is obvious that they are amazing. Everybody got into the skin of their roles. Sarathakumar, Parthiban, Prakash Raj, Jayaram, Nassar and Rehman played some important roles.

Production qualities are huge and amazing. Mani Ratnam did not a leave a stone unturned when it comes to making the film at its best. Screenplay needs to be a little better to understand the flow of the story. AR Rahman poured soul into the film. The background score runs the entire film. Costumes are a grandeur and so are the makeup and hair. Everybody is shown beautifully and their royal looks are just fabulous. Action sequences are ‘wow’.

Credit goes to Mani Ratnam who made a film with a genre that he hasn’t touched before, but nailed in the making of it.

To understand what is happening, you will take time. To get used to ‘who is who’, and then remember their names, to learn who is a ‘Chola’ and who is not, you will need time. So this film is not everybody’s cup of tea. You need to watch it at least twice to understand the mythology properly.

The screenplay and narration could have been a lot better. The first half an hour of the film goes into the development of the story that not all of us are aware of.

BL Verdict: Ponniyin Selvan is grandeur on screen and it needs to be watched for being made beautifully. Worth watching again and again.