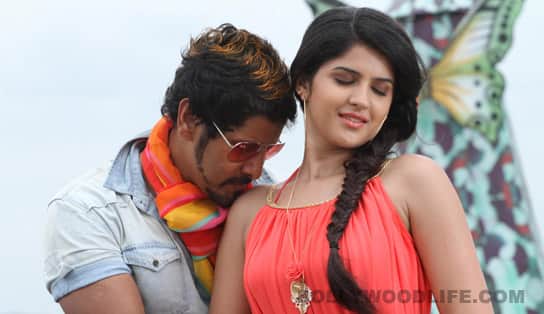 Rajapattai, which means 'the path of the king', has turned out to be a poor show in terms of story, script and performances. Director Suseenthiran, known for presenting films with different themes, has failed to impress with his new offering

Rajapattai is another hero-centric film. Vikram, with his toned physique, dons different get-ups and handles the fighting sequences stylishly. But his efforts fail to make any impact as the script has no life in it. Anal Murugan (Vikram) is a gym boy who acts as stuntman in cinema and dreams of becoming a villain on screen. He meets a noble-hearted but helpless Dakshinamoorthy (K Viswanath) and saves him from the clutches of his own son Chidambaram (Avinash), who wants to grab his father's assets to get political mileage. Chidambaram wants to gift land to Ranganayaki (Sana), a minister and a land mafia, who promises to make him an MLA in return. But Dakshinamoorthy doesn't want to give his land, as he runs an orphanage in that place. Ranganayaki manages to deceive the old man despite Murugan's resistance. Murugan is now determined to get the land back. He is ready to fight with the politician come what may. But there is another powerful person called Vappa (Pradeep Rawat), acting as the brain behind Ranganayaki. Vappa is the most dreaded underworld person, but Murugan is ready for the challenge. Also Read - Kamal Haasan Birthday: Pushpak to Dasavatharam; a look at the best performances by the legendary superstar

The rest of the movie shows how the hero fulfills the mission. Everything is predictable - so there's no suspense, no brilliance and no thrills. Vikram tries his best to lift the movie, but the script didn't give him much scope. His get-ups and satirical act are good, but they don't add anything to the fare. Beautiful looking Deeksha Seth gets a forgettable role in her debut movie in Tamil, while K Viswanath ensures some interesting moments. Sana is impressive in her maiden outing in a stereotype role. Yuvan Shankar Raja disappoints with his songs. Suseenthiran made his debut with"Vennila Kabadi Kuzhu, which was critically acclaimed. Then he proved his credentials as a commercial director in Nan Mahaahn Alla, followed by an off-beat movie Azhagarsamiyin Kuthirai which was also received well. Unfortunately, Rajapattai has turned out to be a poor show, and the director is to be blamed. He had a good storyline, and a hero with proven credentials. But he failed to make use of them. Overall, Rajapattai is a tiring ride on an improper road. Also Read - Bhediya star Varun Dhawan doing a South movie next? Here's what we know