Runway 34 First Movie Review OUT: Ajay Devgn and Amitabh Bachchan are in 'terrific form'; the film's 'climax will shock you'

Runway 34 first movie review: Ajay Devgn and Amitabh Bachchan starrer is one of the finest films ever made in Indian cinema.

Ajay Devgn, Amitabh Bachchan, and Rakul Preet Singh starrer Runway 34 is all set to release on 29th April 2022. The film’s trailer has already created a good pre-release buzz, and it is expected that the film will do a good business at the box office as it’s releasing during the Eid weekend. The movie is directed by Ajay Devgn, and the first movie review of Runway 34 is out now. Umair Sandhu, who is a member of the overseas Censor Board, took to social media to share a review of the film. Also Read - Cannes 2022: Deepika Padukone dons a long body fit gown; netizens ask, 'Anaconda ke khal ka bana hai kya?'

On his Instagram, Sandhu shared, “On the whole, Runway 34 is one of the finest films ever made in Indian cinema. Not only because of its excellent cinematic credentials but also because of the balanced ‘thought’ behind the film. A unique concept! Highly appreciated! Ajay Devgn and Amitabh Bachchan stole the show all the way. Both are in terrific form, the climax will shock you. We say, don’t think, just go for it. Cinema at its very best.” Also Read - Kabhi Eid Kabhi Diwali: Shehnaaz Gill reconsidering decision of making Bollywood debut with Salman Khan film? 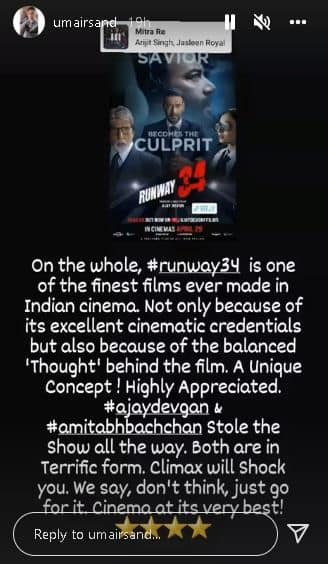 Ajay is leaving no stone unturned for the promotions of the film. Recently, the actor collaborated with Yashraj Mukhate for a song. Mukhate posted on Instagram, “This was sooo much fun!! @ajaydevgn sir doing a rap section for the first time in a track that I made. Isn't that insane?? Runway 34 releasing on 29th of April.”

Well, Runway 34 won’t be getting a solo release. The movie will be clashing with Tiger Shroff starrer Heropanti 2. The promotions of the Ahmed Khan directorial are also happening in full swing, and recently, the makers had released the second trailer of the movie which received a great response.

Let’s wait and watch which film will win this box office race or both will face the storm of Yash starrer KGF: Chapter 2.