Post premature retirement, our eponymous Sharmaji (Rishi Kapoor) grows increasingly restless as he's a busybody. It's then that an opportunity arise to test his culinary skills at kitty parties, which he undertakes unbeknownst to his two sons. 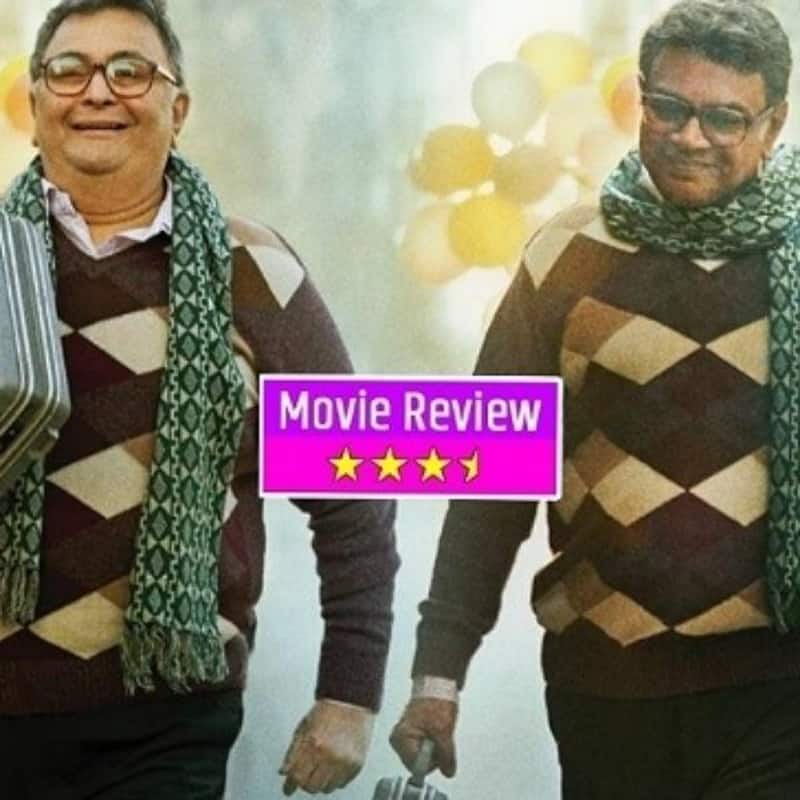 When a famous actor passes away before her/his last movie releases, it always makes for a excessively sentimental watch. It happened with Heath Ledger in the Dark Knight, Carrie Fisher in Star Wars: The Last Jedi, Robin Williams and Mickey Rooney in Night at the Museum: Secret of the Tomb, Paul Walker in Fast & Furious 7, Oliver Reed in Gladiator, Richard Burton in 1984, Spencer Guess Who's Coming to Dinner, and Bruce Lee in Enter the Dragon to list the more memorable instances. Closer him in Bollywood, Sushant Singh Rajput in Dil Bechara, Irrfan Khan in Murder at Teesri Manzil 302, Shammi Kapoor in Rockstar, Divya Bharti in Shatranj, Madhubala in Jwala, and Smita Patil in Galiyon Ke Badshah come to mind. Also Read - Independence Day 2022: Huma Qureshi talks about what freedom means to her; 'Trying to be the best possible citizen of India' [Exclusive]

However, not all of these movies ended their stars' legacies on a high note and it thus becomes doubly imperative to see them, at least on the first viewing, with as impartial an eye as possible as difficult as that may be, especially for fans. And I'll be honest right up front to being as big a Rishi Kapoor fan as any out there, having collected numerous DVDs and even CDs of his classic hits, and even possess a signed copy of his autobiography. Also Read - Independence Day 2022: Shah Rukh Khan, Aamir Khan and more Bollywood actors who were true 'Change-Makers' by redefining patriotism in THESE movies

So, I had to be all the more careful to watch the legendary superstar's posthumous release, Sharmaji Namkeen, directed by Hitesh Bhatia, at its world premiere no less, with the analytical calm that my profession demands. So does the Amazon Prime movie, produced by Excel Entertainment and MacGuffin Pictures, slot in with the better lot of posthumous releases and allow fans to be sentimental for reasons other than pure sentiment. The answer is an emphatic yes even if it's not one of Rishi Kapoor's best movies, not by a long shot.

Post premature retirement, B.G. Sharma aka our eponymous Sharmaji (Rishi Kapoor) grows increasingly restless due to lack of motivation or even a basic routine for a busybody like him. It's then that an opportunity arise to test his culinary skills at kitty parties, which he undertakes unbeknownst to his two sons.

Watch the Sharmaji Namkeen trailer below:

Sharmaji Namkeen is the cutest tribute to Rishi Kapoor saab that any diehard fan could've hoped for, wholly encompassing his entire range as a legendary superstar plus brilliant actor. And it's a treat watching him and Juhi Chawla rekindle their hit romantic pairing one last time on screen. Kudos to Paresh Rawal, too, for stepping in and giving it his all (despite there being some issues I'll address later). The supporting cast of Suhail Nayyar, Isha Talwar, Sheeba Chaddha, Ayesha Raza, Satish Kaushik and Parmeet Sethi are also at the top of their game.

Hitesh Bhatia's direction breezily gets the job done, especially in the second half, where things significantly pick up, culminating in a laugh-out-loud, clap-worthy bit of ingenious comedy during the climax. Piyush Puty's cinematography, Bodhaditya Banerjee's editing and Sneha Khanwalkar's background score add to the enjoyment of the film without ever standing out.

Despite its elements being shaken up, Sharmaji Namkeen's core plot can't escape its air of familiarity. And truth be told, that familiar plot is also nothing to write home about and would've stuck out like a sore thumb for the vast portions where it merely trudges along in the first half with nothing much happening weren't it for the skilled charms of its entire cast coupled with the often funny and perpetually smart dialogues of Hitesh Bhatia and his co-writer, Supratik Sen.

Another sore point is the jarring effect every time Paresh Rawal substitutes for Rishi Kapoor on scree for no fault of his. Both are/were marvellous actors, but come from very different schools and backgrounds of acting, and it's just unfair to have expected Pareshji to share the same spark in the sweet, borderline romantic moments with Juhi, who has proven chemistry with Chintuji, whose credentials of romancing on screen as a superstar should in Bollywood are only outmatched by the King of Romance, Shah Rukh Khan.

Sharmaji Namkeen is a sweet, simple film, where you don't mind getting swayed by sentiment because of how it touches your heart. There are issues no doubt, but not once do they trump the fitting swansong this turns out to be for Rishi Kapoor. I'm going with 3 out of 5 stars.