Thappad movie review: Taapsee Pannu rebels against a slap that will sting society at large

All's hunky-dory in Amrita (Taapsee Pannu) and Vikram (Pavail Gulati)'s marriage, with the former even happily making peace with embracing her husband's dreams as her own, till the moment her dream-man whacks her across the face, out of the blue. 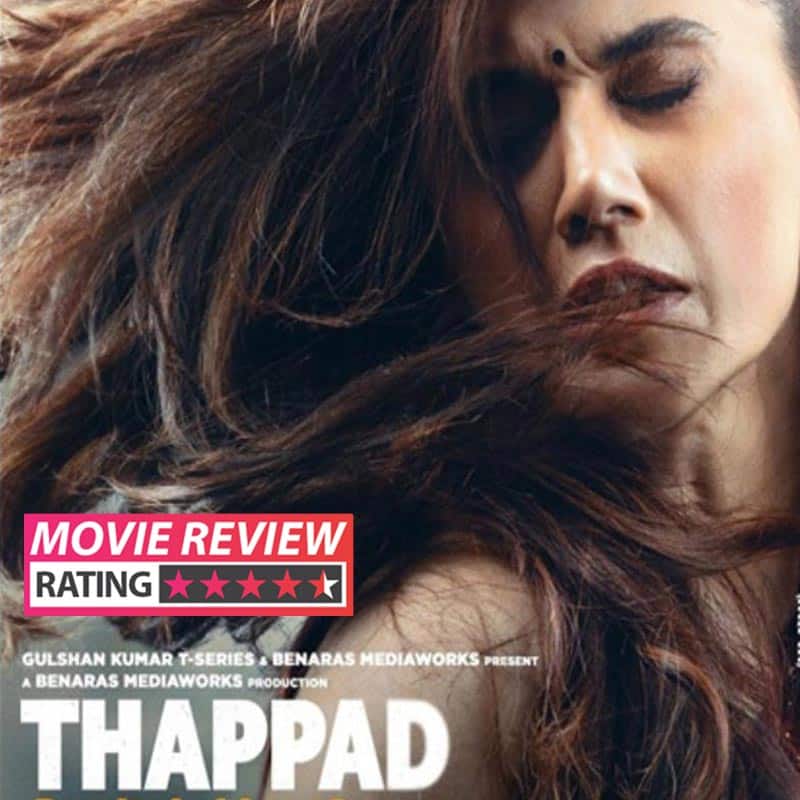 There have been tons of films that normalize hitting a woman. No, I'm not talking about domestic violence, but what society has been told is acceptable — slapping a woman. Films have mirrored this shameful societal norm, with not only Hindi films being guilty of the dilution. In days gone by, Hollywood legends like John Wayne, Robert Mitchum, Humphrey Bogart and others have blithely "tamed the shrew" or so to speak by plastering 5-finger marks across actress' cheeks. Admittedly, this detestable behaviour faded away from western cinema before waning from Indian films, but that has got to do more with an anthropological reflection in our cultures and mindset rather than cinematic callousness. In fact, as recently as last year, a film like Kabir Singh rose to blockbuster success because our society finds a slap in a relationship to be totally acceptable. In such a scenario comes Director Anubhav Sinha and his lead star, Taapsee Pannu, with Thappad, to challenge all cinematic, cultural, societal and patriarchal norms, and they do so with a slap that's likely to reverberate through our collective conscience for ages to come. Also Read - Dia Mirza shares the horrifying story of her near-death experience in her fifth month of pregnancy

Also, vote for Troll Assassin of the Year here:

Scroll below to read my complete Thappad review:

What's it about
Amrita (Taapsee Pannu) and Vikram (Pavail Gulati) are leading a happily married life (or at least that's the picture formed in both their minds), with the former having taken the onus of taking care of the home, and the latter being the breadwinner (and a very successful one at that). All's hunky-dory, with Amrita even happily making peace with embracing her husband's dreams as her own, till the moment that her dream-man, whacks her across the face, out of the blue. He's never had a history of violence, it was an act born out of professional frustration, and he's never likely to do it again. But it's a slap that forces Amrita to see their relationship and her life in a completely different light, while the hypocrisy and patriarchy of those around her also begin to slowly peel away. Also Read - Bheed: Rajkummar Rao and director Anubhav Sinha of Article 15 fame collaborate for the first time for socio-political drama – plot details INSIDE

What's hot
Almost everything works in Thappad like a well-oiled machine. The writing (Anubhav Sinha and Mrunmayee Lagoo) is the biggest winner, with scenes and dialogues that form a vice-like group on your psyche, likely to remain etched long after the end credits roll. Moments like a woman's routine life being taken for granted; eyebrows being raised at a single mother's source of income; Amrita joking with her maid about how the latter escapes her husband's bearing (till she experiences it herself), Vikram joking that Amrita needs to cook better before learning to drive; Amrita's mother (Ratna Pathak Shah) exhibiting patriarchy while her husband (Kumud Mishra) only thinks about supporting his daughter; Amrita's lawyer believing that a slap isn't reason enough for such a hue and cry stay with you, shake you, make you introspect. Also Read - Anubhav Sinha and Hansal Mehta announce the star cast of their action thriller – two BIG STAR KIDS to be launched

On the other hand, dialogues like Amrita's father laughing about how his father-in-law cried on his wedding day, asking for forgiveness in case of any wrongdoing on his part; Amrita's neighbour (Dia Mirza) telling Vikram to not make her ruin the belief beautiful men exist; Amrita's mother trying to trivialize her daughter's plight by stating how her mother, and her mother's mother all taught their daughters to place their home first; Amrita's mother-in-law (Tanvi Azmi) coaxing the former to believe that women need to compromise a bit; Vikram time and again stating that it was only one mistake; and several of Amrita's dialogue with her lawyer speak volumes without having to drive home the point or delve deep — such is the impact of how they've been written.

The performances from everyone are of the highest order, but when you have such a brilliant script at your disposal, the acting is definitely going to hit a home run, especially when the film has been blessed with such marvelous actors. Sinha's direction is also right on the money, ensuring that he narrates his tender screenplay with care, love and the foresight to not sensationalise a sensitive subject. Soumik Mukherjee's camerawork, while not out of this world, suffices for a movie like this, and Mangesh Dhakde brings a wonderful sense of normalcy to the volatile scenario with his background score.

What's not
Yasha Ramchandani's editing could have been crisper, thus infusing a bit more pace into the proceedings. Better songs by Anurag Saikia, to back up the terrific score would've also been a welcome addition. Plus, the opening sequence involving the entire cast with orange candies is a tad random and confusing.

BL Verdict
There's precious little not to marvel at in Thappad. It's bound to be a extremely uncomfortable watch for several viewers, particularly couples, and it might also be tough for entire families to view together, given how close to home it's likely to hit, but that's what makes the film nothing short of a masterpiece, and a milestone in Indian cinema. I'm going with 4.5 out of 5 stars.