Ujda Chaman movie review: Sunny Singh's bald persona engages you in bits and pieces, but never gels together as a coherent narrative

Ujda Chaman review: The concept of Sunny Singh's film is quite interesting and it's good to see a mainstream film exploring such an offbeat topic in a commercial manner. Read our complete review... 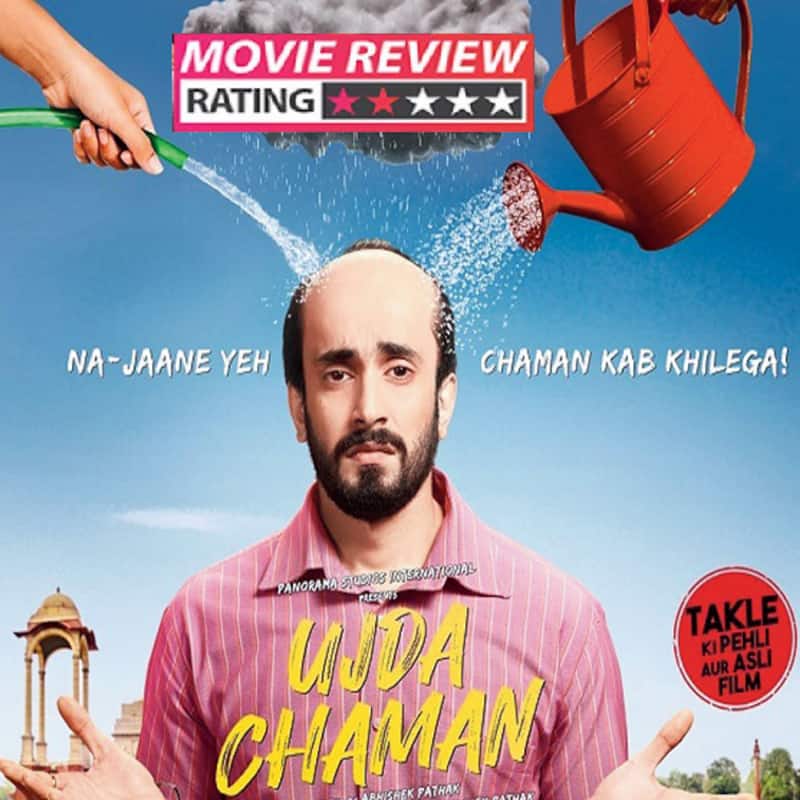 Films on male-pattern baldness aren’t new to Bollywood, leave alone Indian cinema in general — case in point being the Kannada film Ondu Motteya Kathe on which Ujda Chaman is based. I Am 24, released back in 2010, and Hair is Falling, released a year later, also dealt with the same themes, coincidentally, by taking a comedic route. While the former, starring Rajat Kapoor, Neha Dhupia, Ranvir Shorey, Saurabh Shukla, Manjari Phadnis, Delnaaz Irani, and Lillete Dubey, met with generally favourable reviews, the latter, starring Rajesh Bhardwaj, Sanjana Tiwari, Manoj Pahwa, and Bharti Singh, was pretty much panned by critics left, right, and center. However, it’s pertinent to note that beside these two entries, there hasn’t been a single film on the subject from the Hindi film industry, which makes Ujda Chaman still a pretty fresh concept. So, which side of the critical fence does it fall on and does it do enough to give a shot in the arm to this important topic, which its predecessors failed at. Let’s find out. Also Read - Drishyam 2 vs Bhediya vs An Action Hero box office collections: Ajay Devgn starrer OVERPOWERS Varun Dhawan-Ayushmann Khurrana's films [Full Report]

What’s it about Also Read - Fahmaan Khan, Shehnaaz Gill and more – Meet the top Instagrammers of the week

Ujda Chaman revolves around Chaman Kohli (quite a tongue-in-cheek name considering the plot), played by Sunny Singh of Sonu Ke Titu Ki Sweety and Pyaar Ka Punchnama fame — a 30-year-old Hindi lecturer, afflicted with highly premature balding. His condition doesn’t deter his spirits though from seeking a beautiful wife, which sets the stage from some comical encounters and a lesson or two about how we, as a society, view something that’s very natural to the make genes of our species. Things come to a head when a meeting with an astrologer convinces him that he’ll remain a celibate bachelor all his life if he doesn’t find a companion soon. Also Read - An Action Hero Movie Review: Ayushmann Khurrana-Jaideep Ahlawat starrer impresses netizens and critics with an unexpected climax [VIEW TWEETS]

What's hot
The concept is quite interesting and it's good to see a mainstream film exploring such an offbeat topic in a commercial manner. While the aforementioned films also tried to normalize the social stigma attached to baldness, they did it a niche, arty fashion, which always stifles the appeal for a border demographic. The first half managed to keep you relatively engrossed and more than a few punchlines in this portion evoke laughter. Out of the cast, Karishma Sharma, Aishwarya Sakhuja, Sharib Hashmi, and Atul Kumar make their presence felt in small parts.

What's not
Post interval, the film drags endlessly and when it isn't dragging, things happen way too conveniently to form any connect with the audience. Also, the rest of the cast from Maanvi Gagroo to Grusha Kapoor, can do little to save the film's downward curve as much as they try, on account of their poorly etched roles. You can't help but question some of the decisions of the characters and how the narrative arcs unfolds. On top of it, the major problem of the film is Sunny Singh and his wooden expression throughout the film. The movie really needed a better leading man to make it more watchable, especially in the second half. Despite the makers going the commercial route, things slide by the wayside too fast to keep the audience attentive. The songs, too, do little to make a difference as does the camerawork, editing, and production design.

BL Verdict
Ujda Chaman is well intentioned and does its best to make a point at a mainstream level, but a sloppy second half and expressionless leading man deflate the noble points the film tries to make. I'm going with 2 stars