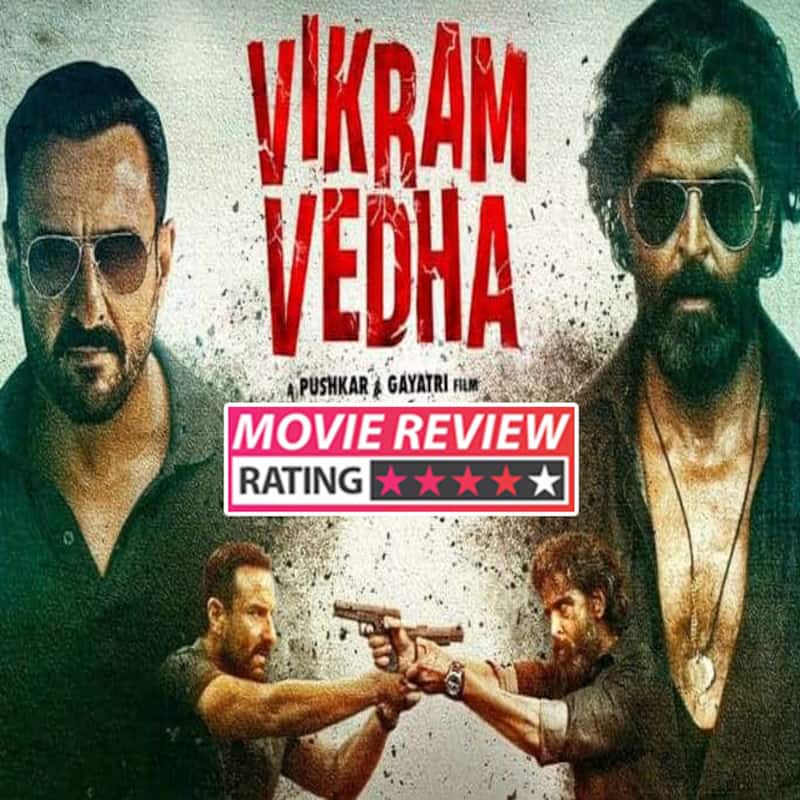 Saif Ali Khan is Inspector Vikram is part of an elite police task force to capture notorious gangster Vedha. He runs his operations from Lucknow, and is known for his daylight murders. On the day, when the cops plan a covert and elaborate mission to capture Vedha, he walks into the police station to surrender himself. Thereafter, starts the series of stories which alters Inspector Vikram's concept of morality and how ambiguous it can be. The inspiration is the fable of King Vikram and Betaal which every kid must have read once in his or her lifetime. Also Read - Radhika Apte expresses unhappiness with her small role in Vikram Vedha: I did the film as I wanted to work with...

Watch the trailer of Vikram Vedha below...

The performances by Hrithik Roshan and Saif Ali Khan are top-notch. Both of them get equal number of scenes, and bring out the best in each other. We have rarely seen Hrithik Roshan playing small-town characters except Super 30 but this one does justice to his superstar status. His eyes do all the talking, and the swag quotient is high and how. Saif Ali Khan shows off his toned body in tight polo tees, and his performance is also flawless. In the supporting cast, Rohit Saraf and Sharib Hashmi shine through. In fact, the character of Babloo is very intriguing. The setting is Lucknow and very few films have captured the city so beautifully. P S Vinod deserves a special mention for some innovatively shot scenes, which enhance the viewing experience manifold. Sam CS has given the terrific BGM that does justice to the thrill, intrigue and theme of the film. Also Read - Hrithik Roshan's post on brain focusing on 'NEGATIVE' after Vikram Vedha box office failure leaves fans wondering and worried

Those who have watched the Tamil movie might make constant comparisons which is inevitable. The love story of Yogita Bihani (Chanda) and Rohit Saraf (Shatak) fails to strike a chord. The makers have done a bit of fanservice to Hrithik Roshan which makes the film a tad longer, and does not serve much purpose. Radhika Apte's role is not much to write home about.

Vikram Vedha with its tight screenplay, good dialogues and solid performances is the perfect mass masala action entertainer. There is a bit of every element. It again reinforces that Hrithik Roshan is one of the best actors amongst superstars and can deliver almost any character! The climax is astounding and one of the best ever in recent history.