Adipurush teaser: Prabhas and Kriti Sanon's chemistry grab eyeballs as the couple hold hands and walk down the stairs; fans say, 'They look great together'

Prabhas' sweet gesture towards Kriti Sanon at Adipurush teaser launch grabbed many eyeballs. If the industry grapevine is to be believed, Prabhas and Kriti are in a relationship and they are taking it slow as they explore each other. 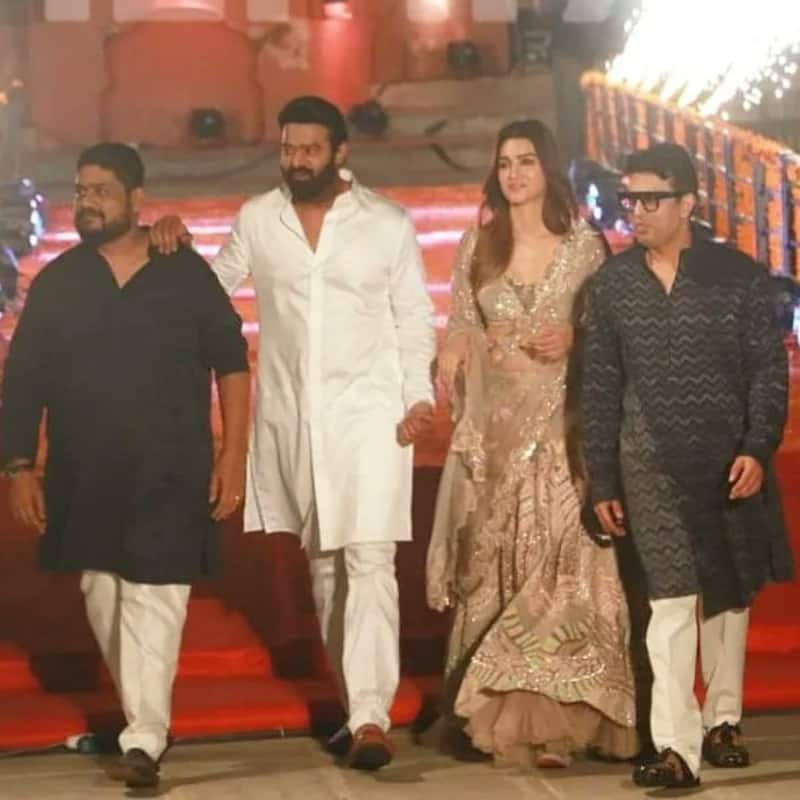 Ever since Kriti Sanon called Prabhas on Koffee With Karan 7, speculations of their rumoured love affair started doing the rounds in the industry. If the industry grapevine is to be believed, Prabhas and Kriti are in a relationship and they are taking it slow as they explore each other. Amid the rumours of their romance, Prabhas' gesture towards Kriti at Adipurush teaser launch grabbed many eyeballs. Also Read - Shah Rukh Khan-Nayanthara to Ranbir Kapoor-Rashmika Mandanna: Exciting pairings in upcoming new movies in 2023 that fans are waiting for

The teaser of Adipurush was launched in great fan fare in Ayodhya, Uttar Pradesh. A 50 feet tall poster was erected to mark the occasion. While Prabhas was seen dressed in a white kurta set, Kriti looked beautiful creamy embroidered sari. The two chatted, shared laughter, hugged each other and there was a point when Prabhas held Kriti's hand as they walked down the stairs. It certainly brought a smile on Kriti's face. Also Read - Prabhas to Jr NTR: Why working with SS Rajamouli is a HUGE risk for the careers of actors

While Prabhas and Kriti's chemistry made everyone talking, their fans couldn't stop going gaga over them. Many people said that they look great together and said that they would certainly make a great couple. Well, it seems like Prabhas and Kriti have already got fans shipping for them. Also Read - Kriti Sanon, Shilpa Shetty, Ananya Panday and more: Bollywood actresses criticised for copying Urfi Javed's style

A couple of weeks ago, Bollywood Life had informed fans that Prabhas and Kriti bonded well since the first day on the sets. People were surprised that a shy guy like Prabhas was so comfortable around Kriti and used to chat with her openly. There's no doubt that they are great friends, but it is too early to say whether the two are dating or looking for a romantic relationship.

During the teaser launch, Prabhas said that he was really scared to play the role of Lord Ram, adding that they have made this film with lots of love and dedication. Adding to this, Kriti said, "Very few actors get a chance to play such a character, and I’ve got this quiet early in my career. It has been a dream come true experience.”

Adipurush is director Om Raut's take on the Ramayana by Valmiki. The film is set 7,000 years ago and in the film, Prabhas's character is not called Lord Ram, he is Raghav, which is another name for Ram. Sita, played by Kriti Sanon, is called Janaki (as in King Janaka's daughter), while Saif Ali Khan's Ravana is Lankesh (lord of Lanka), which are also derivatives of their Ramayana names.