Manmadhudu was one of the biggest hits of Tollywood in early 2000s and is considered as a classic. 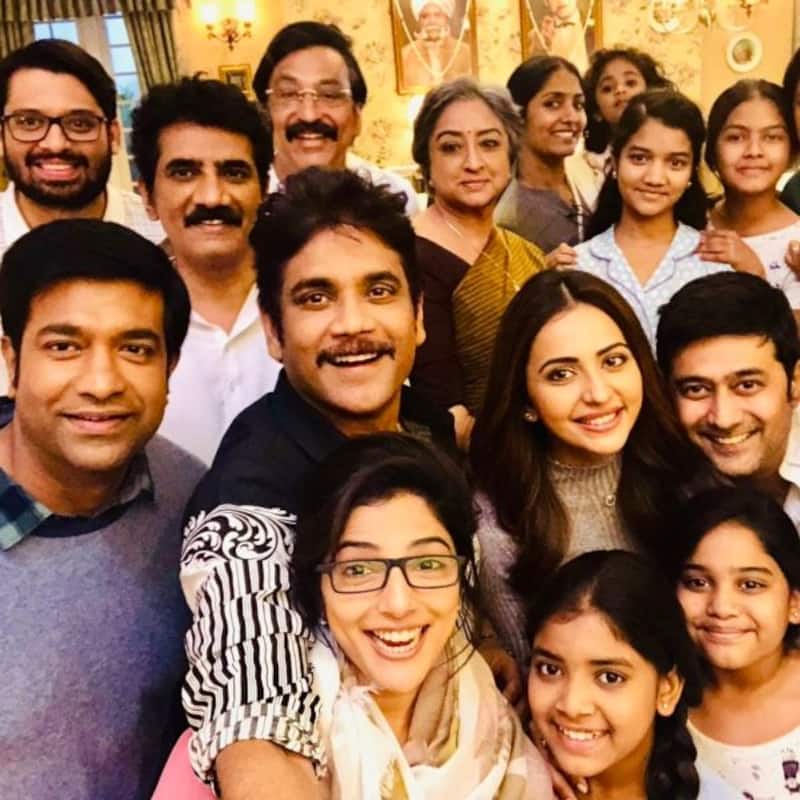 In 2002, Telugu cinema audience were treated with a lovely film titled Manmadhudu which starred Akkineni Nagarjuna. The film was a comical ride and audience loved every bit of it. Directed by Vijay Bhaskar, the story of Manmadhudu was written by Trivikram Srinivas. 17 years later, the film is now getting a sequel and has been titled Manmadhudu 2. The film was officially launched few days ago and is currently being shot in Hyderabad. The sequel will be directed by actor-director Rahul Ravindran who made his debut with ChiLaSow. Nag has given fans a reason to rejoice now by sharing a picture from the sets of the film, which is now going viral on the internet. "Me and my #Manmadhudu2 family!!! Loving it!!❤️[sic]" wrote Nagarjuna in his tweet along with the picture. Also seen in the click is Rakul Preet who plays the leading lady in Manmadhudu 2. Check out a few pictures here: Also Read - Indira Devi last rites: Vijay Deverakonda, Nagarjuna, Rana Daggubati and more pay respects; Mahesh Babu holds his father's hand tight [View Pics]

One more from the sets of #Manmadhudu2

Manmadhudu was one of the biggest hits of Tollywood in early 2000 and is considered as a cult classic. Comical lines from the film are adapted by movie buffs in daily conversations, proving that the film was a big hit. And since it was a blockbuster, expectations from the sequel will be very high. Also Read - Top South Indian actors and their alleged extra-marital affairs that rocked the industry

Nagarjuna will also join hands with actor-director Dhanush for his next which will be a bilingual. The film will feature actors from various industries. Nagarjuna will also be seen in Bollywood film Brahmastra which is directed by Ayan Mukherji. The film also stars Ranbir Kapoor, Alia Bhatt and Amitabh Bachchan in lead roles. Nag will essay the role of Vishnu in Brahmastra and will reportedly has a crucial character to play in the plot. Also Read - Brahmastra box office collection: Ranbir Kapoor, Alia Bhatt film beats biggies like 3 Idiots, Good Newws – Chennai Express, Kick and others next in line

The veteran actor was last seen in Devadas which was multi-starrer with Nani. The film had Nagarjuna playing a don whose life crosses paths with Nani who is a doctor. The film went on to earn some decent numbers at the box office.

Stay tuned to BollywoodLife for all latest updates from world of entertainment!