Pooja Hegde turns a year older today. The actress is on a professional high with big budget projects with some banners. Pooja Hegde will be seen as Rajkumari Mala in Housefull 4 that hits the marquee on October 28. She will also be seen in the Trivikram Srinivas flick Ala Vaikunthapurramuloo that releases in January 2020. Pooja Hedge will be seen with Allu Arjun for the second time. The team made it special for her with a small celebration. Allu Arjun wished her on his Insta story as well. The actress was seen in Mahesh Babu's Maharshi where her role got a lot of appreciation. 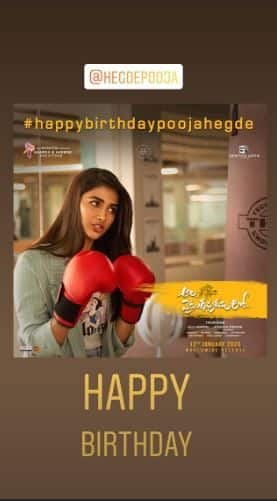 Ala Vaikunthapurramuloo is apparently based on regional factionism. In the film, Allu Arjun plays a cop who has his own methods of handling the matter. The film is coming in Sankranthi 2020. They have worked in Duvvada Jagannadham before. Commenting on her terrific journey in the Telugu film industry, Pooja Hegde told Firstpost, "Everything boils down to professionalism and the cordial relations that I’ve with my directors and producers. I would also like to believe that directors like my screen presence, and are willing to offer me something interesting each time because they see potential in me." Also Read - Avatar 2, Prabhas’ Adipurush, NTR30 and more: Films that can be the next 100 crore openers and beat Yash's KGF 2 She was recently seen in the film, Gaddalakonda Ganesh where she had a special dance number. She told the portal, "I haven’t played a village belle in my previous films, and this film gave me a chance to do something new. The look too was so new to me. It was fun to dress up in simple half-saris, and oil and braid my hair, and I didn’t have much make-up on either. After Mukunda, people kept asking me if I would do a glamorous role, and then after Duvvada Jagannadham, it was more about will I ever stop doing glamorous roles (laughs). Gaddalakonda Ganesh was a welcome change for me." The actress will be seen in Jaan with Prabhas as well.