Thalapathy 66 will mark the Tollywood debut of Vijay. It will be bankrolled by Dil Raju.

While the news of Thalapathy Vijay's collaboration with Maharshi director Vamshi Paidipally has been in the news for quite some time, we are still waiting for the official announcement from the makers. Touted to be a Tamil-Telugu bilingual, the film will reportedly bankrolled by Dil Raju and while all the Thalapathy fans are gearing up to know the exciting update of this venture, singer Krish has confirmed that Vamshi and Thalapathy are joining hands for a film while wishing the director on his 42nd birthday. The singer wrote, "Happy Happy Birthday to One of my Favorite Person & Director @directorvamshi Have an Amazing Year ahead my friend.. Waiting & Best wishes for your next with @actorvijay Anna..." (sic). While he deleted the tweet, the screenshot of his message is going viral on the internet. Also Read - Family feud! Thalapathy Vijay moves court against parents shocking fans 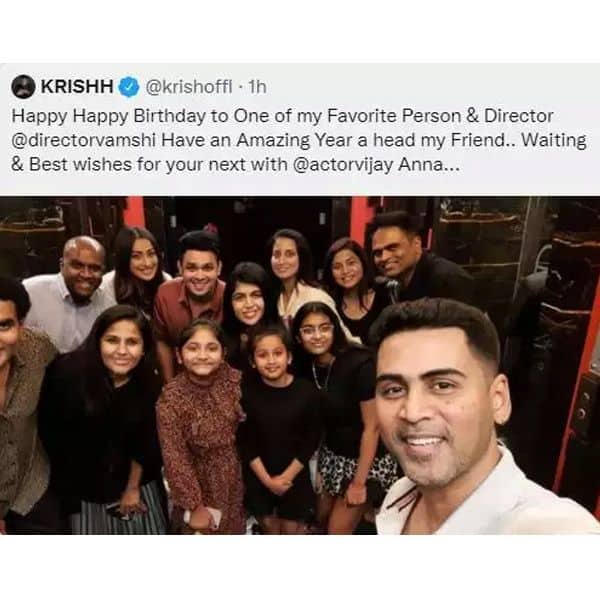 Meanwhile, Thalapathy Vijay will be next seen in Beast. Talking about the film, it also features Pooja Hegde and Yogi Babu in key roles. The film is directed by Nelson Dilipkumar (known for helming Nayanthara's Kolamavu Kokila and Sivakarthikeyan's Doctor) and produced under the banner of Sun Pictures. It marks the Kollywood debut of the Housefull 4 actress. Also Read - #Thalapathy66: From the BIG launch to grand festive release – here's all you need to know about Thalapathy Vijay-Vamshi Paidipally-Dil Raju's Tamil-Telugu bilingual

The film marks the fourth collaboration between Thalapathy Vijay and Sun Pictures after Vettaikaaran, Sura and Sarkar. The music of the film will be composed by Anirudh Ravichander and the makers are targeting to release the project during the festive weekend of Pongal in 2022. So, are you excited for the Telugu debut of Vijay with Thalapathy 66? Tweet to us @bollywood_life.