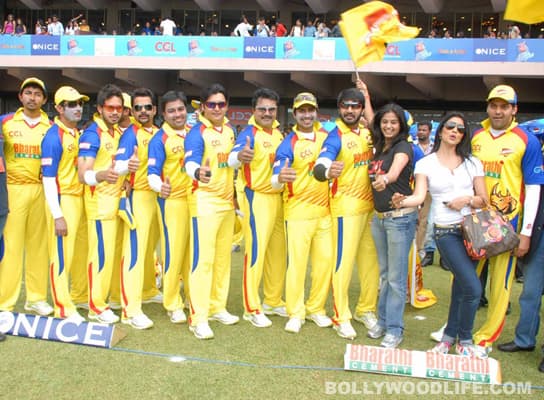 The team defeats Karnataka Bulldozers in a spirited final

With Suriya sitting this match out, Abbas-led Chennai Rhinos defeated Sudeep's Karnataka Bulldozers in the final of the first-ever Celebrity Cricket League tournament on Sunday at Hyderabad. It came as a nasty surprise to Bulldozers supporters as their team had won all their matches in the run-up to the finals. Also Read - Machine song Itna Tumhe: Kiara Advani and Mustafa's awkward dance moves kill the otherwise romantic track

However, the Rhinos managed to accumulate 188 runs in their allotted 20 overs and the Bulldozers were unable to match it. Chennai's Vikranth (66 from 29 balls) and Vishnu Vishal (61 from 37 balls) made all the difference with their perfectly planned performance. Karnataka started badly and lost two quick wickets in the first two overs. They could only muster 165. Also Read - Machine song Itna Tumhe: Kiara Advani and Mustafa's awkward dance moves kill the otherwise romantic track

Vishnu took home the Man of the Match trophy, while the Man of the Series award went to Dhruv from Karnataka Bulldozers. Also Read - Blast from the past: Abbas’ sad journey from being pin-up boy to doing closet cleaner ads

Several members of the film fraternity - including Sridevi, Mohan Babu, Shatrughan Sinha and Subhash Ghai - were present at the stadium to watch the match. Shriya Saran performed to her popular songs during the break between the innings.