Darshan arrested for firing at his wife 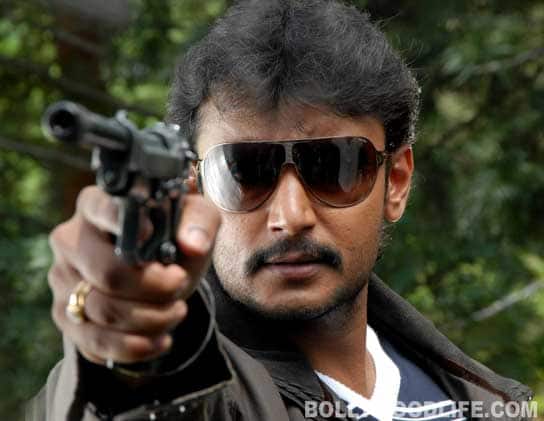 Darshan's extra-marital affair seems to have triggered this unhappy incident

‘Challenging Star’ Darshan was taken into custody by the Bangalore police early this morning, ostensibly over complaints of domestic violence from his wife Vijayalakshmi, that culminated in the actor taking out his licensed gun and shooting her. While Vijayalakshmi was injured in the shooting, their son too got hurt in the attack that took place late on Thursday night. The cops have booked two cases against Darshan and confiscated the weapon. The actor’s wife and son have been admitted to Gayathri Hospital in Vijay Nagar, central Bangalore. The feud between the actor and his wife has been in the news for quite some time with sources telling us that Vijayalakshmi was upset at Darshan’s alleged affair with actress Nikita Thukral, who appeared opposite him in movies like Yodha, Prince and Krantiveera Sangolli Rayanna. While Darshan continuously denied the affair, his wife was convinced of the liaison and reportedly moved out of their house taking their young son with her. Fearing public outcry from the conservative Sandalwood crowd, the actor reportedly convinced his wife her to return but the duo kept having fights. Our sources tell us that the actor’s in-laws are keen to take the matter to court. Also Read - Sidharth Malhotra starrers Mission Majnu, Thank God, Yodha offered HUGE amounts from OTT even before hitting the BIG screen [EXCLUSIVE]