Darshan gets a new Jaguar 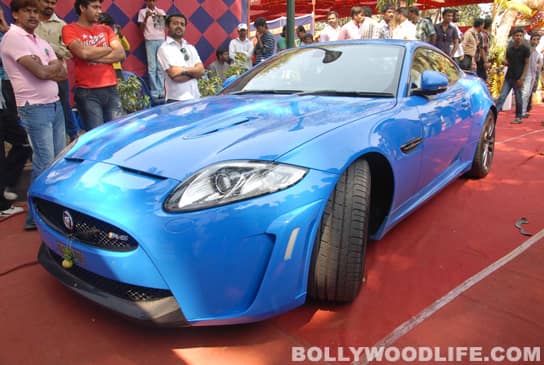 Darshan’s fondness for fast bikes and sleek cars is well known. The Kannada actor's most recent acquisition is a blue Jaguar worth Rs 1.80 crore. It’s his 35th birthday and this gift from his wife Vijayalakshmi made the day all the more special for him. Darshan drove to the launch of his new film, Bulbul Mathadakilva, flaunting his new acquisition on his birthday. Also Read - Kannada stars Darshan Thoogudeepa, Devaraj meet with an accident as car rams lamp post

Naturally it got everyone talking and Darshan said it was a birthday gift from his wife. All hasn't been well between the couple for some time. Just a few months ago Darshan was in trouble with the law for allegedly assaulting his wife. They reunited later after industry veterans took it upon themselves to sort things out for the couple. The pricey Jaguar, everyone says, is their way of telling the world their marital troubles are a thing of the past and love is back in their lives. Nothing like a nice gift to sort things out, no? Let us know if you agree. Also Read - Kannada actors Darshan, Devaraj and Prajwal sustain minor injuries in a car accident

Click here to read about the reunion of Darshan and Nikita

Click here to read about Darshan's life getting back on track