Do you want to see Rashmika Mandanna and Thalapathy Vijay in a film together? Well, the actress is keen to work with the Master actor. More deets inside.

Rashmika Mandanna is one popular actress in demand and that too, not just in regional films but across India. She is soon going to make her debut in the Hindi film industry and even before the release, she has another Hindi project alongside other regional projects in her kitty. And now, the Geeta Govindam actress is keen to work with Master actor Thalapathy Vijay. It so happened that the Rashmika Mandanna conducted an 'Ask me Anything' session on her gram and a fan asked her, "When Will u act with #Thalapthy". And Rashmika responded with a sticker saying, "Very Soon." Have a dekko at the snapshot of the same here: Also Read - Breaking! Krish confirms Vijay and Vamshi Paidipally for #Thalapathy66 – deets inside 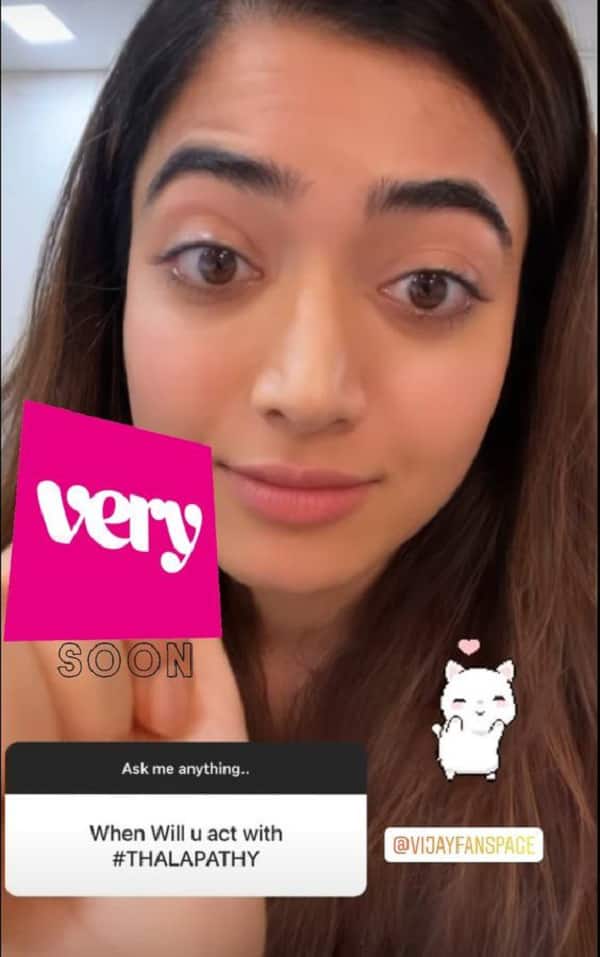 Later, she was even asked to describe Vijay and she said, "Love." Well, Thalapathy is indeed one of the most popular actors in the Tamil film industry. He recently announced his film, Beast that is reported to star Pooja Hegde, Yogi Babu, Shine Tom Chacko, VTV Ganesh and more. On the other hand, Rashmika Mandanna has Mission Majnu, her Bollywood debut with Sidharth Malhotra. She also has Good Bye with Amitabh Bachchan, Neena Kulkarni and more. Helmed by Queen director Vikas Bahl, the filming of the same began in April this year. Also Read - Radhe Shyam: Pooja Hegde spills the beans on the release date of Prabhas starrer

Rashmika Mandanna's regional project includes Pushpa alongside Allu Arjun. The film which was supposed to be a single release will now be split into two parts. The first part of Pushpa will release next year while the second part is said to release in 2022. Pushpa is an action thriller directed by Sukumar and also stars Fahadh Faasil, Prakash Raj, Jagapathi Babu, Dhananjay, Sunil, Vennele Kishore, Anasuya Bharadwaj to name a few.

What do you have to say about Rashmika Mandanna wanting to work with Thalapathy Vijay? We love the sound of this pairing and we bet they'd create an amazing on-screen pair. Let us know your thoughts by tweeting @bollywood_life.