Trisha is one of the celebrities from South cinema who follows Game of Thrones since the first season.

The latest episode of Game of Thrones, third in Season 8, has left fans stunned who are now going gaga about it. The climax of the latest episode seems unbelievable (giving no spoilers) and gives an unanticipated (rather expected) twist to it. The episode was sorts of tribute to all the soldiers who went down fighting the Wights. After the latest episode, in which Lyanna Mormont kills the Giant of Whitewalkers and dies while saving many lives, fans of GoT have become quite emotional. Tamil and Telugu actress Trisha Krishnan is one of them who is an ardent follower of Game of Thrones. Trisha posted stories on her Instagram page about the latest developments which is quite emotional. Also, Trish seems to be in awe with the background score of the episode which is composed by Ramin Djawadi. Check out her Instagram stories here: Also Read - Game of Thrones 8 Episode 6: From one last death to the new King of Westeros, here are 8 most shocking moments from the series finale 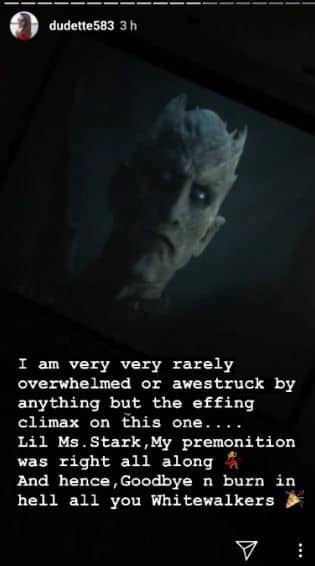 Also Read - Game of Thrones 8 Episode 6: Jon Snow pets Ghost and Twitter is elated the direwolf finally got the love he deserves! 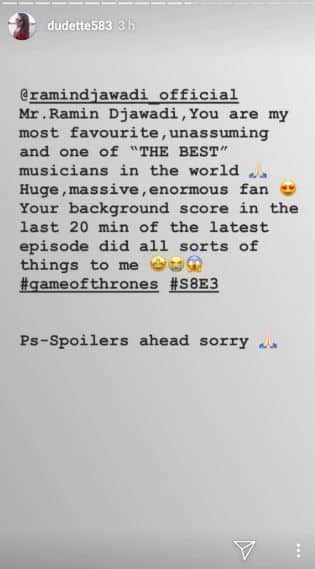 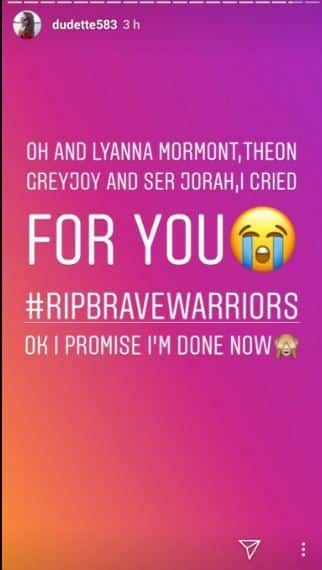 Trisha is one of the celebrities from South cinema who follows Game of Thrones. The actress' posts on her Instagram posts too have these threads which proves she is a huge fan. The latest episode of Game of Thrones seems to be the most emotional one amongst the ones released so far.

Speaking about Trisha, the actress was last seen in Petta which starred Rajinikanth in the lead role. Directed by Karthik Subbaraj, Petta had Trisha playing Rajinikanth’s wife in the flashback portions. Although it was a brief role, Trisha impressed audience immensely with her portrayal.