Kajal Aggarwal recently faced backlash on social media for copying Mother's Day poem to wish her mother Vinay Aggarwal on the occasion. The original writer again took to Instagram to clarify that Kajal has apologised to her in her DM.

Kajal Aggarwal recently faced backlash on social media for copying Mother's Day poem to wish her mother Vinay Aggarwal on the occasion. She shared a poem titled Dear Mum to express her gratitude towards her mother for being the best grandmother 'Nani' to her newborn son Neil. However, the original writer named Sarah called out Kajal for passing off her original poem as hers. Also Read - From Samantha Ruth Prabhu to Kareena Kapoor Khan: 6 actresses who crossed all limits of boldness on screen

"My Dear Mum poem passed off as original work by Kajal Aggarwal. The weird copy of my original caption with...a few words swapped out makes me think it isn't an honest mistake," the writer said in an Instagram post. After her objection gained momentum on social media, Kajal edited her poem and gave due credit to Sarah. The comments on Kajal's post have been turned off. Also Read - Cannes 2022: Aditi Rao Hydari reveals she 'can’t compete with the giraffes'; says, ‘100 percent I am going to falter’

Following up this incident, the writer again took to Instagram to clarify that Kajal has apologised to her in her DM and she was glad that the controversy was finally over. "To follow up on the events of last night, I thought I’d share that I had a direct message from Kajal Aggarwal apologising for what happened. I also had some interesting messages from those who I assume might be fans of the actress. It’s all a little bit more than anything. I would like to have been involved in, so I’m very glad it’s over. Thanks to everyone who supported me in getting my original work credited. I’ll be happy when this has drifted away," she said in a statement on Instagram. Also Read - South News Weekly Rewind: Kajal Aggarwal shares adorable pic of newborn son Neil with husband; Samantha Ruth Prabhu-Vijay Deverakonda to kiss in Kushi 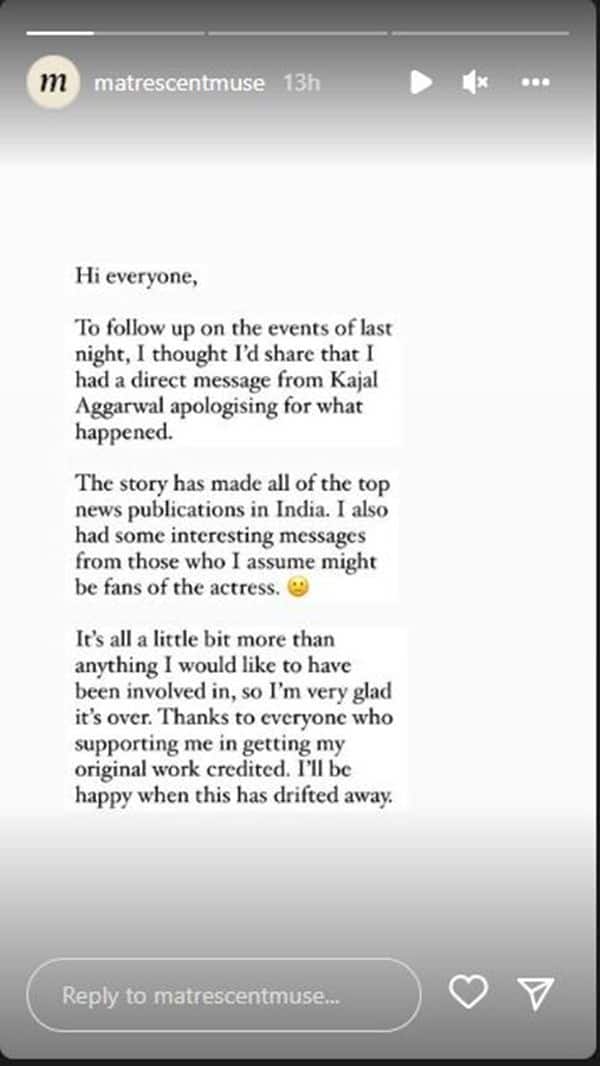 Besides this, Kajal also shared a picture with her newborn and thanked her son Neil for giving her immense joy of being a mother for the first time. "Thank you for being the one with whom I get to experience all of these firsts. There is no one else who could have done it. God chose you, my little prince. You are my sun, my moon, and all my stars, little one. Don’t you ever forget that," read an excerpt from her post.

Kajal and Gautam welcomed their son on April 19. Kitchlu and Aggarwal families are overjoyed with the addition of a new family member, as the celebrations continue.