The first teaser trailer of KGF 2 was released on Yash's birthday. And now Raveena Tandon has shared a major update on the film's new release date.

There's no denying that KGF 2 has been one of the most anticipated movies since 2020. The first teaser trailer of KGF 2 was released on Yash's birthday. The video showed Yash making a stunning entrance by blowing up a row of automobiles with a machine gun and lighting a cigarette with the barrel of the red-hot gun. The scene became an instant hit among the fans who made it viral on social media by sharing screenshots of it. Also Read - Mouni Roy will take your breath away as she channels her inner seductress and grooves in the HOTTEST way ever in new video

Raveena uploaded an image of a warrior figurine with a message written on it. The message read, "The monster will only arrive when the Hall is filled with gangsters. His new arrival date will be announced soon. KGF Chapter 2." She captioned the image as, "Witness the magnum opus come to life soon." Also Read - KGF Chapter 2: Sanjay Dutt's Adheera to get a powerful introductory song for Rocky Bhai Yash's actioner

KGF 2 was originally scheduled to release on July 16, but due to the COVID-19 pandemic, the release was put on hold. In the film, Raveena plays the role of Ramika Sen. Her first look was revealed on her 46th birthday as a gift to her fans. Dressed in a sari, Raveena looked intense in her character poster. 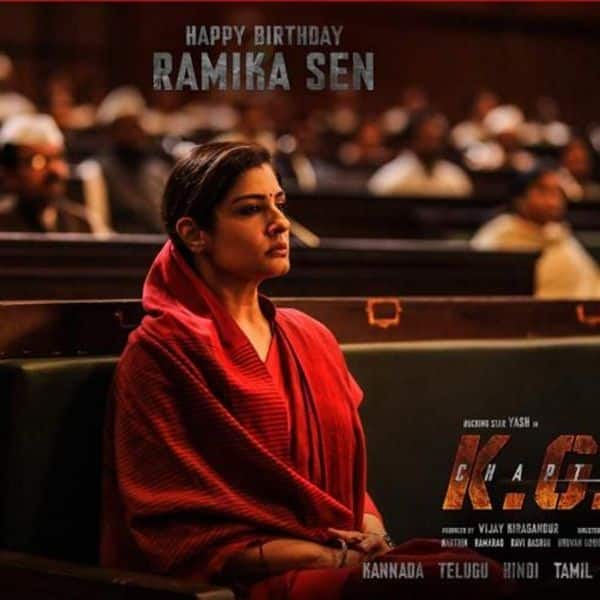 Sanjay Dutt will be seen playing the antagonist to Kannada superstar Yash in the film. He had shared a string of pictures where he looked dapper in a black T-shirt and olive-coloured cargo pants. He completes his look with aviator sunglasses and wrote, "Gearing up for #Adheera! #KGFChapter2." It is being said that an intense fight sequence will happen between Adheera and Rocky bhai which is being touted as the major highlight of the film.

KGF 2 is a sequel to the 2018 blockbuster KGF Chapter 1. The film, which is directed by Prashanth Neel, will release in Hindi, Kannada, Tamil, Telugu and Malayalam.