Malayalam actress Anna Ben ‘sexually harassed’ in Kochi's shopping mall; says, 'One of two men grazed his hands on my back’

The incident took place at Kochi's Lulu mall where Malayalam actress Anna Ben was allegedly groped by a man while she was shopping with her family.

In a horrific incident, Malayalam actress Anna Ben, who is known for her role in her debut film Kumbalangi Nights, was sexually harassed by two men at a shopping mall in Kochi. The incident took place at Kochi's Lulu mall where the actress was allegedly groped by a man while she was shopping with her family. Also Read - Kerala Police releases first visuals of two youths who groped Malayalam actress Anna Ben at Kochi's shopping mall

Anna Ben has shared her ordeal on Instagram stories urging women to strongly react to such incidents if they ever occured.

"I'm not the one to rant often on social media. But what happened today is something I can't seem to let go.

Two men walked past me in a generously spaced aisle in Lulu hypermarket which barely had people crowding and one of them not so accidentally grazed his hands on my back while walking past me. Because it caught me off guard I couldn’t react immediately. I wanted to give him the benefit of a doubt but you know when something is just not right, you feel it.

My sister saw this very clearly as she was standing not so far away. She came to me and asked if I was okay. I was clearly not. The fact that it looked deliberate even for her made it clear that I was not imaging this. I was blank for a minute trying to process this. I walked towards them but they completely ignored me. I made sure that he knew I understood. And they both left the aisle immediately.

I was still so angry because I couldn't say anything. I couldn't think of a sensible sentence at that time. My sister and I left the aisle and joined my mom and brother at the vegetable counter. These men apparently followed us. While my mom and brother got busy picking up things Su and I were trying to move the cart to bill. These men came to us again and this time that guy had the audacity to talk to me and my sister. Trying to get closer as he spoke. He wanted to know the names of the movies I have been a part of We turned a cold shoulder and asked the guy to mind his own business and leave. When my mom walked towards us they left. 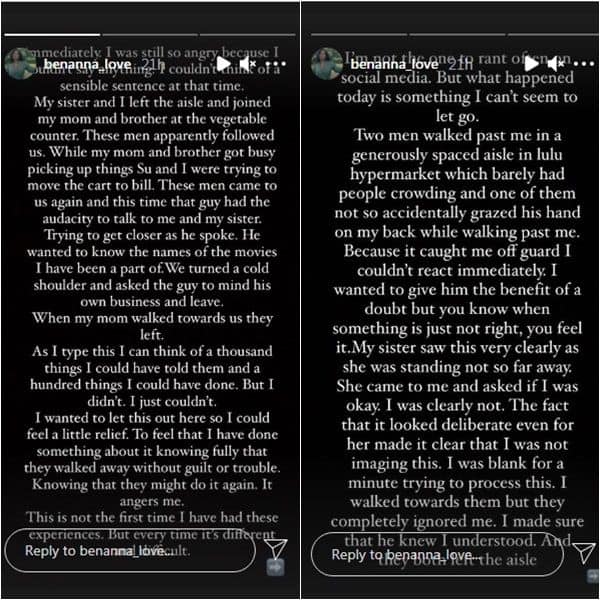 As I type this I can think of a thousand things I could have told them and a hundred things I could have done. But I didn't. I just couldn't. I wanted to let this out here so I could feel a little relief To feel that I have done something about it knowing fully that they walked away without guilt or trouble. Knowing that they might do it again. It angers me. This is not the first time I have had these experiences. But every time it's different and difficult.

Being a woman has been very tiring, to be on guard every minute as you step out of your house. To watch my cloths when I bend and turn. To guard my chest with my arms in a crowed. The list goes on. And on the days I'm home, I worry about my mother, my sister and my friends who have to do the same things. It is all because of these sick men. You take away our safety. You take away our comfort and the joy of our womanhood. I despise you. 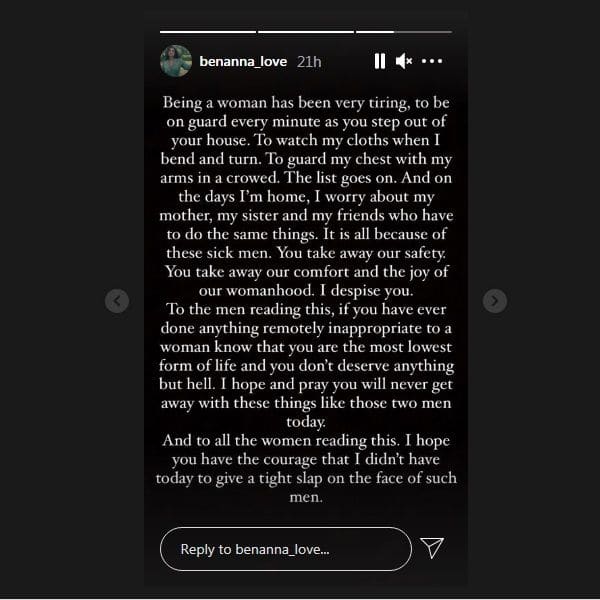 To the men reading this, if you have ever done anything remotely inappropriate to a woman know that you are the most lowest form of life and you don't deserve anything but hell. I hope and pray you will never get away with these things like those two men today. And to all the women reading this. I hope you have the courage that I didn't have today to give a tight slap on the face of such men."