Not Sai Dharam Tej, but Vijay Deverakonda to star in the Telugu remake of Ranveer Singh's Gully Boy?

When a film turns out to be a blockbuster hit, it's a trend to be remade in various other languages. The same is happening with the recent Bollywood hit Gully Boy which starred Ranveer Singh and was directed by Zoya Akhtar. The hip-hop music based film went on to amass more than Rs 230 crore at the box office turning out to be a blockbuster hit. News has it that Gully Boy will be remade in Telugu and popular producer Allu Arvind is in talks for acquiring the rights of the film. Reports reveal that the makers are considering few top Telugu stars for the remake and discussions are currently underway. Also Read - Trending Entertainment News Today: Ranveer Singh-Alia Bhatt's next film, Salman Khan's Tiger 3 faces new blow, Shah Rukh Khan's doppleganger goes viral and more

It was earlier reported that Allu Arvind was considering Sai Dharam Tej to reprise the role played by Ranveer Singh. However, latest reports reveal that Sai Dharam Tej may not be playing the part. Reportedly, Rowdy Star Vijay Deverakonda has been approached to play the lead role in the Telugu remake of Gully Boy and the actor is considering the offer. If this turns out to be true, fans of the Arjun Reddy star will be an elated group and will be quite excited to see him play the rustic role. Also Read - Is THIS the title of Ranveer Singh-Alia Bhatt's next with Karan Johar? Here's what we know

BollywoodLife had run a poll for the Telugu remake of Gully Boy between Allu Arjun, Vijay Deverakonda and Rana Daggubati. And fans picked Vijay Deverakonda as their choice to feature in the Telugu remake of Gully Boy. And with these reports of Vijay starting in the remake, looks like fans are about to witness the Rowdy Star in the project. Also Read - From Deepika Padukone's Tara from Tamasha to Anushka Sharma's Farah from Dil Dhadakne Do — 4 Bollywood characters you want as your BFF 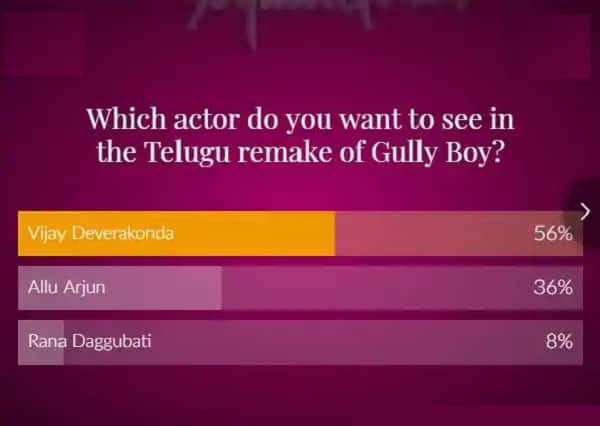 Directed by Zoya Akhtar, Gully Boy is about the life of a young man who embraces rap music to succeed in life. Ranveer, playing Murad, left a long-lasting impression on audience with his performance as a struggling young man.

Speaking about Vijay, the actor is busy with the shooting of his upcoming film Dear Comrade which is a political drama. Directed by debutante Bharat Kamma, the film also stars Rashmika Mandanna in other lead role.