'Oosaravelli' Movie review: Watch at your own risk 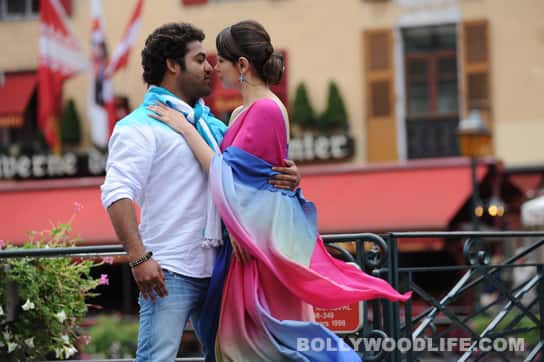 When a big star like Jr NTR, whose terrific screen presence is a major attraction for his fans, teams up with a stylish and successful director like Surendar Reddy, one expects a lot of fireworks. Alas, Oosaravelli fails to live up to the expectations, and one can blame a weak script for this debacle

The story moves on predictable lines from the beginning. First half of the film is full of comedy elements whereas second half is high on mindless action sequences.Though, both the hero and the director have consciously tried to underplay the pedigree and power of the senior NTR's family, the net effect has not been encouraging and positive. In fact, the director too has tried to repeat the successful formula of his previous hit film Kick, but silly dialogues and presentation ruin the effect. Hence, this ends up as a predictable revenge drama and nothing else. Also Read - NTR30: Director Koratala Siva set to announce a leading Bollywood actress opposite Jr. NTR

Tony (Jr NTR) is involved in a lot of illegal activities to earn his bread and butter. He accidentally meets Niharika( Tamannaah) and falls for her and then he starts following her, but she doesn't reciprocate because she is already engaged to a rich guy. Tony wants to prove that he truly loves her, unlike his fiancee. And slowly, it becomes clear that Tony is on a mission to be accomplished and Niharika has a past which is forcing her to be subdued. Finally, Tony succeeds in getting his love and complete his mission as well. Also Read - Nandamuri Balakrishna makes a statement on Jr NTR's political entry and it leaves us confused

Tamannaah has delivered an excellent performance, especially in the second half. Unfortunately, an actor of the caliber of Prakash Raj is totally wasted in the film. Payal Ghosh who plays the role of heroine's friend is quite good. As for the highlights, it is Rasool Ellore's cinematography of songs that grabs your attention. The movie is a disappointment for ardent NTR fans but for average viewers it is nothing more than a predictable hotchpotch film. Also Read - RRR, Pushpa and more: 5 highly-anticipated Telugu films of the year

Check out Jr NTR and Tamannaah in Oosaravelli stills