South actor Chiyaan Vikram was spotted at a wedding of his housekeeping staff's son. He looked every bit handsome in a white silk shirt and veshti. 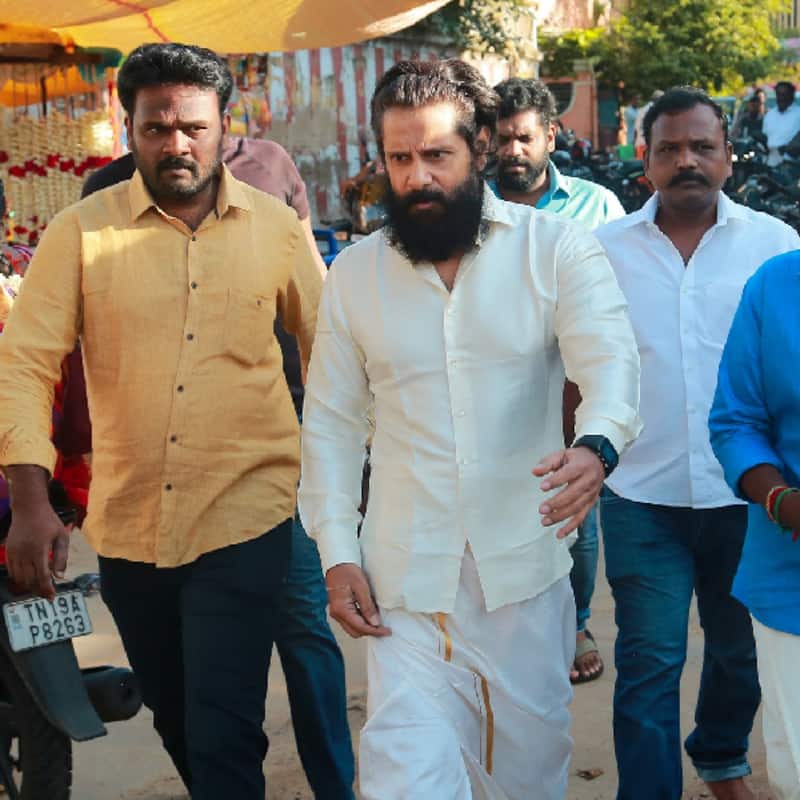 Chiyaan Vikram is among the biggest names down South. The actor is now gearing up for the mega-budget Ponniyin Selvan: Part I. The promotions have already kick-started. He plays the role of Aditya Karikalan in the film helmed by Mani Ratnam. But in between his packed schedule, Chiyaan Vikram made time to attend the wedding of his housekeeping staff's son. As per the reports, this housekeeping staff has been working for the actor for more than 40 years. The pictures from the event have gone viral on social media. Also Read - Ponniyin Selvan box office collection day 4: Chiyaan Vikram, Aishwarya Rai Bachchan film passes Monday test with flying colours both in India and overseas

In the pictures available on Twitter, one can see the actor dressed in a silk white shirt along with a white veshti with a golden border. Since he is sporting long hair these days, the actor put a hairband to keep them in place. He greeted everyone at the wedding and even blessed the newlywed couple. Going by the pictures, it seems he also took part in the wedding rituals. The bright smile on his face added to his charm. Also Read - Ponniyin Selvan 1 Hindi box office collection: Chiyaan Vikram starrer surpasses the lifetime collection of Kamal Haasan, Thalapathy Vijay and more South stars' dubbed films

.@chiyaan today attended the wedding of Deepak with Varshini and blessed the young couple. Deepak is the son of Mary, a member of the housekeeping section of #ChiyaanVikram's home for over 40 years. pic.twitter.com/75MSKiPqpN

All about Ponniyin Selvan I

Talking about Ponniyin Selvan I, the film also stars Aishwarya Rai Bachchan, Jayam Ravi, Trisha, Shobhita Dhulipala, Vikram Prabhu, Prakash Raj and many more. It is one of the most ambitious projects of Mani Ratnam reportedly made on the massive budget of Rs 500 crore plus. It is set to release on September 30, 2022. The trailer of the film has already left all the fans super excited. We all are now waiting to watch this period drama on the big screen. Also Read - Ponniyin Selvan set to face huge box office competition for Dussehra; Vikram, Aishwarya Rai Bachchan film to be challenged by THESE South biggies