Post the success of Maharshi, Mahesh Babu jets off on a holiday with wife Namrata Shirodkar and kids – view pics

Mahesh Babu and his wife Namrata Shirodkar along with kids Gautam and Sitara are off to a holiday after the humongous success of Maharshi. 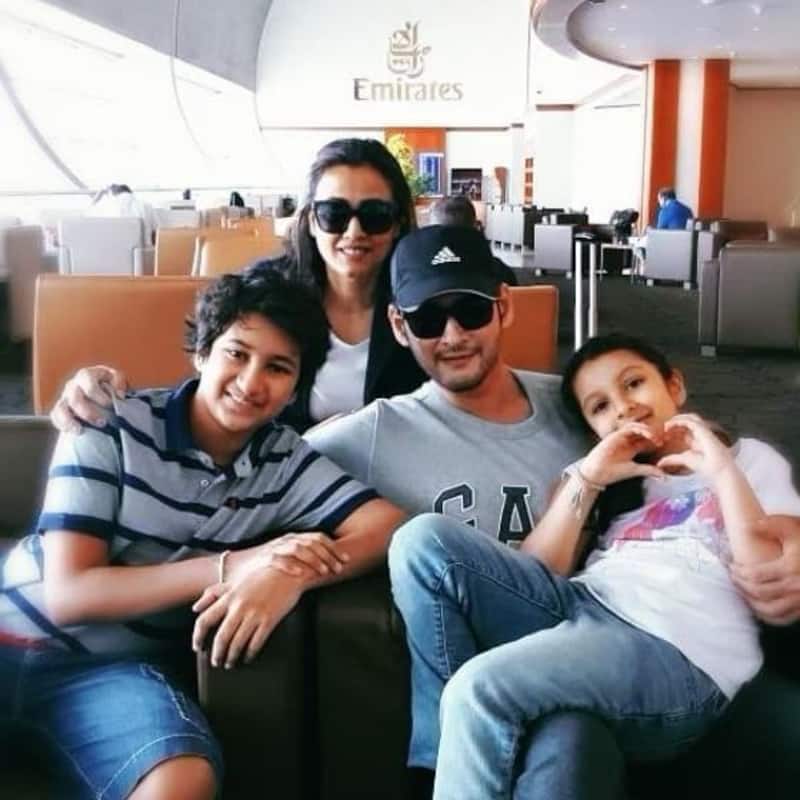 Fresh from the success of his latest outing Maharshi, Tollywood superstar is off on a holiday with wife Namrata and kids Gautam and Sitara. Namrata posted couple of pictures on her Instagram page which suggest that the family plans to holiday hard post a grinding season at the movies. Mahesh Babu too posted a picture from the lounge of an airport and captioned it "Off to another memorable holiday... This one is special...♥♥ #CelebratingMaharshi[sic]". Mahesh and his family take small holidays and travel together to unexplored places and Namrata’s Instagram page is proof of that. And this time, the holiday will be a bit long since Mahesh has bagged the biggest hit of his career in the form of Maharshi. Check out few pictures here: Also Read - Karthikeya 2 Hindi, 1770, Mahesh Babu's next with SS Rajamouli and more; latest updates on now showing and new movies from South you cannot miss

Off to another memorable holiday... This one is special...♥♥ #CelebratingMaharshi

(Maharshi movie review: This Mahesh Babu-starrer takes off lavishly but has a turbulent landing) Also Read - Mahesh Babu starts working on his massive physical transformation for SS Rajamouli’s next? Drops an exciting hint

Speaking about the film, Maharshi is going great guns at the box office and has already entered that Rs 100 crore club. The commercial entertainer has earned approximately Rs 121 crore approximately and these include numbers from the overseas markets. In the US, Maharshi has earned a collection of $2 million in less than a week which is the fastest ever Mahesh Babu film. With Maharshi, the superstar gets his fifth million-dollar film in the North American market which has a vast Telugu audience. Also Read - Before Varun Dhawan-Kiara Advani's JugJugg Jeeyo, THESE 5 films were re-released in theatres on public demand

The success of celebrating Maharshi with the entire team last night in Vijaywada was an evening I will always cherish. To all the audiences of Telugu cinema and my dear fans Thankyou for this overwhelming and magical success of Maharshi??? @directorvamshi u have given me my finest and proudest film till date... still remember the day when u said no one else can play this part other than Mahesh Babu. That for me, brother, is the biggest compliment ever. Will always be grateful to you... Continue making films with ur heart like #Maharshi, and win hearts. Love and Respect..

Directed by Vamshi Paidiaplly, Maharshi also stars Pooja Hegde as the leading lady while Allari Naresh is seen in a crucial role. Prakash plays Mahesh’s father in the plot while Jagapathi Babu is the lad antagonist. The film opened to a grand release and continued its golden run at the box office over the weekend. Mahesh Babu seemed confident about the film before the release and had said that the content will appeal to every section of the audience.

"It's a film that has so much to offer. It has a very powerful social message that is well-laced with other commercial elements. I say it's a film unlike anything I've done so far because audiences can easily relate to my character Rishi. The journey of my character will be both interesting and inspiring," Mahesh Babu had said.