So apna Baahubali Prabhas is finally on Instagram. If you missed it and you are not following him already, what kind of a fan are you really? But again, there is nothing at all that you've missed out yet, as the Saaho actor has not made a single post, not even the profile picture or bio has been added. The account does not have the verified blue tick either. But surprisingly overnight, he has garnered over 7 lakh followers already! It was about time Prabhas joined the platform. Not to mention with his big budget Bollywood debut Saaho with Shraddha Kapoor coming up, it will prove handy for social media promotions. Also Read - Prabhas-Prashanth Neel, Allu Arjun-Sukumar: 5 biggest director-actor collaborations that promise to shatter records left, right and centre 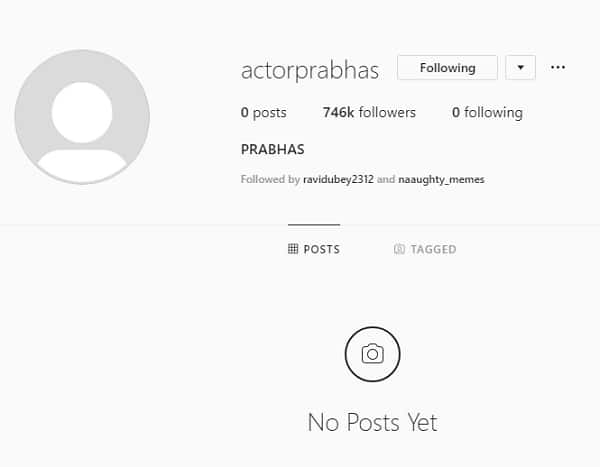 The South sensation is no stranger to social media though. Prabhas has a Facebook page which boasts of 10 million followers and the actor has been receiving abundant love from fans through their comments. It comes as no surprise then that his Instagram account has received such an overwhelming response. Also Read - Jr NTR, Rana Daggubati and more: Tollywood lead stars who aced the villain avatar

Talking about Saaho in a recent interview with Mid-Day, Prabhas said that he feels audience like him in action flicks and he hopes people like his action-hero avatar in Saaho. "After Baahubali it's an action thriller. I feel people like to see me in action movies, so after Baahubali, they may like it," he said.

Set to release in Hindi, Telugu and Tamil, Saaho also stars Jackie Shroff, Chunky Pandey, Neil Nitin Mukesh and Mandira Bedi who will all play the antagonists. The second-most expensive film ever made in India, Saaho is set to hit the screens on August 15.