Allu Arjun and Rashmika Mandanna starrer Pushpa has not just taken the box office by storm, but the craze of the film has gone to another level. Read on to know more... 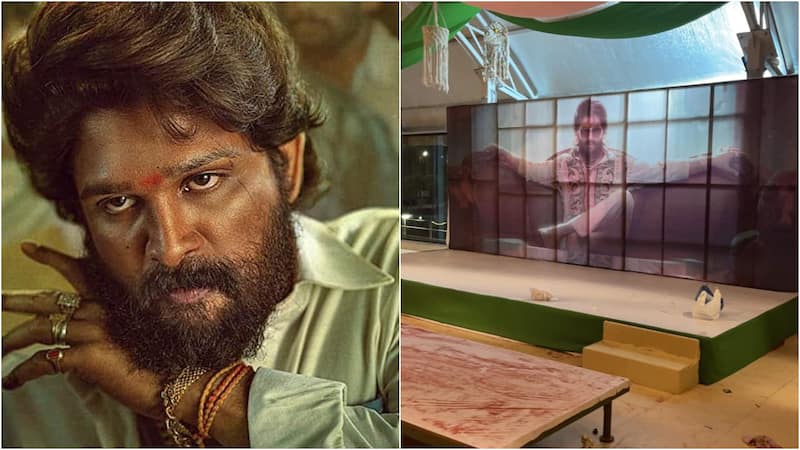 Allu Arjun and Rashmika Mandanna starrer Pushpa: The Rise is one of the biggest hits of 2021. The movie is a blockbuster at the box office and its Hindi version also did great business at the ticket window. The Hindi dubbed version of Pushpa recently also entered the 100 crore club. It’s more than a month Pushpa released in theatres, but it is still the talk of the town. Many celebs, cricketers and common people have been making reels on Pushpa’s songs and dialogues, and now, here’s something interesting about Pushpa fever that’s taking over the country. Also Read - Trending South News Today: Nayanthara-Vignesh Shivan's Spain vacay pictures go VIRAL, clarification on Vijay Sethupathi's casting in Pushpa 2 and more

A Twitter user recently posted a picture of a place where a Pushpa theme wedding haldi function is going to take place. The user tweeted a couple of pictures of the venue and wrote, “Happened to visit this place. It’s haldi function tomorrow. And his theme is Pushpa (also it’s North Indian wedding) @alluarjun reach though.” Also Read - Vijay Sethupathi to play negative role in Shah Rukh Khan’s Jawan but is he also a part of Allu Arjun’s Pushpa 2? Here’s what we know

A Twitter user replied to the post and wrote, “This movie is reaching next level even big Bollywood stars also did not get this kind of chance...it's just magic.” One more user tweeted, “Wahh Can't imagine pushpa 2 hype.” Another user replied, “Wow, this is so cool.” Also Read - South News weekly rewind: Naga Chaitanya on his tattoo with Samantha Ruth Prabhu connection, Rashmika Mandanna opens up about her BREAKUP with Vijay Deverakonda and more

After the super success of Pushpa: The Rise, now moviegoers are eagerly waiting for the second part of the film Pushpa: The Rule. The movie will reportedly release in December this year, and it will surely take the box office by storm.

Meanwhile, Allu Arjun starrer Ala Vaikunthapurramuloo will be getting its Hindi premiere on television on 13th Feb 2022. The movie will be aired on the Dhinchaak Channel.