In a shocking incident, a 24-year-old die-hard fan of Telugu superstar Prabhas has committed suicide by hanging himself from the ceiling fan after being disappointed by the negative reviews of Radhe Shyam.

In a shocking incident, a 24-year-old die-hard fan of Telugu superstar Prabhas has committed suicide by hanging himself from the ceiling fan after being disappointed by the negative reviews of Radha Krishna Kumar's recently released directorial Radhe Shyam. The film also stars Pooja Hegde alongside Prabhas. Despite the visual grandeur, the movie failed to impress a large section of the audiences. Also Read - Samantha Ruth Prabhu, Pooja Hegde and more: 6 South Indian actresses who love to sweat it out in the gym

As per a report in Tollywood.net, the deceased youth, identified as Muthala Ravi Teja of Tilak Nagar, Kurnool, Andhra Pradesh, was not happy with the unfavourable response to Prabhas' much-awaited film Radhe Shyam. The report further states that he saw the film the day it was released in theatres. Following the screening, he conveyed to his mother and a friend that the film did not live up to the expectations. He hanged himself to death when he was alone in the house. He was a welder by profession. Also Read - South News Weekly Rewind: Naga Chaitanya’s rumoured relationship with Sobhita Dhulipala, Prabhas’ demand to hike fees and more

This is not the first time that a fan has taken such drastic step to end his life over Radhe Shyam's negative reviews. Last year, an ardent fan of Prabhas had written a suicide note to the makers of Radhe Shyam after the film's shoot was halted due to the pandemic. "I never dreamed that I would write a suicide note as I have not written a single letter so far. At least I think Radhe shyam team will give an update even after seeing my death. it's enough, no more asking," read the note that had surfaced on Twitter. Also Read - Shamshera: 'Will Ranbir Kapoor be able to pull it off?' Actor reveals Aditya Chopra, Karan Malhotra's biggest fear while casting him 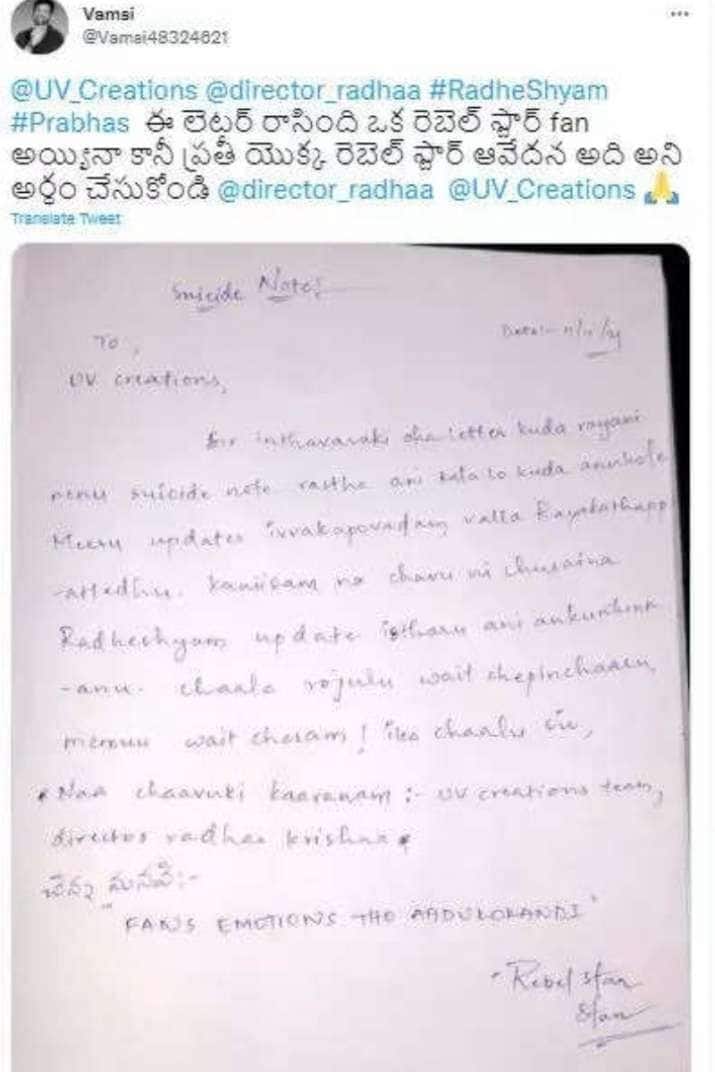 Meanwhile, Radhe Shyam director had taken a dig at the negative reviews with a cryptic tweet that reads, "Thank u all for the tremendous response. We made the movie with love and your pouring your love back?? It’s not the reviews, it’s the result which matters.” His response to the comments on social media profiles indicates that the director has been quite upset over the negative comments on Radhe Shyam.

Thank u all for the tremendous response. We made the movie with love and your pouring your love back?? It’s not the reviews it’s the result which matters ??? #BlockBusterRadheShyam #RadheShyam

In one of his recent interviews, Radha said, "You go to a vegetarian hotel expecting them to serve chicken biriyani? We have always told this is a love story, but critics are bashing us saying there is no action in the movie. That makes any sense?". Radhe Shyam, however, has picked up in terms of collections, as the weekend box-office numbers indicate good business for the movie.