Rajinikanth and Dhanush pitted against each other by Aishwarya and Soundarya 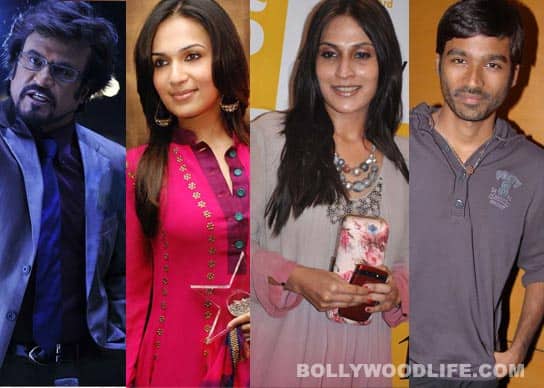 Sibling rivalry is a common thing that happens in most households. Rajinikanth’s daughters Aishwarya Dhanush and Soundarya Ashwin Rajinikanth are also going through the same situation but will it help or simply create unnecessary ripples in a calm situation, remains to be seen. Both Aishwarya and Soundarya wish to release their directorial debut films 3 and Kochadaiyaan respectively on the same date. While competition is always healthy and keeps you on your toes, is it really necessary in this case, we wonder. But in all this, wethinks the real tussle will be between Rajinikanth and his son-in-law Dhanush. The Superstar has always ruled the roost at the box office. So, will the Kolaveri di star’s sudden popularity create a dent in Rajinikanth’s success? There’s ideally a slim chance for that to happen but one can never be too sure. Due to Rajinikanth’s mass appeal, Kochadaiyaan will be dubbed in Hindi while the worldwide popularity of Kolaveri di has compelled the makers of the film 3 to make a Hindi dub of their film as well. In an interview Dhanush confirms, “Yes, I am planning to dub 3 in Hindi and release it along with the Tamil version.” Also Read - Trending OTT News Today: Ayushmann Khurrana turns into Money Heist's Professor, Sushmita Sen calls herself 'lockdown specialist' after Aarya 2 and more

While Dhanush’s 3 is on the finishing line, some romantic scenes are pending for Rajinikanth’s Kochadaiyaan. If both films still happen to release on the same date, there’s no doubt they will eat into each other’s profits. So we hope that the sisters take a step down from their rivalry and give it a serious thought. But the bigger dilemma is for the audience. Should they watch Rajinikanth’s Kochadaiyaan or Dhanush’s 3? While we are still making up our mind, do tell us which film you plan to watch first. Also Read - Atrangi Re song Chaka Chak: Sara Ali Khan tries to win Dhanush over with her seductive power moves – watch video