Rajinikanth, Kamal Haasan, Sridevi – 5 finds of late K Balachander who went on to be great celebs! 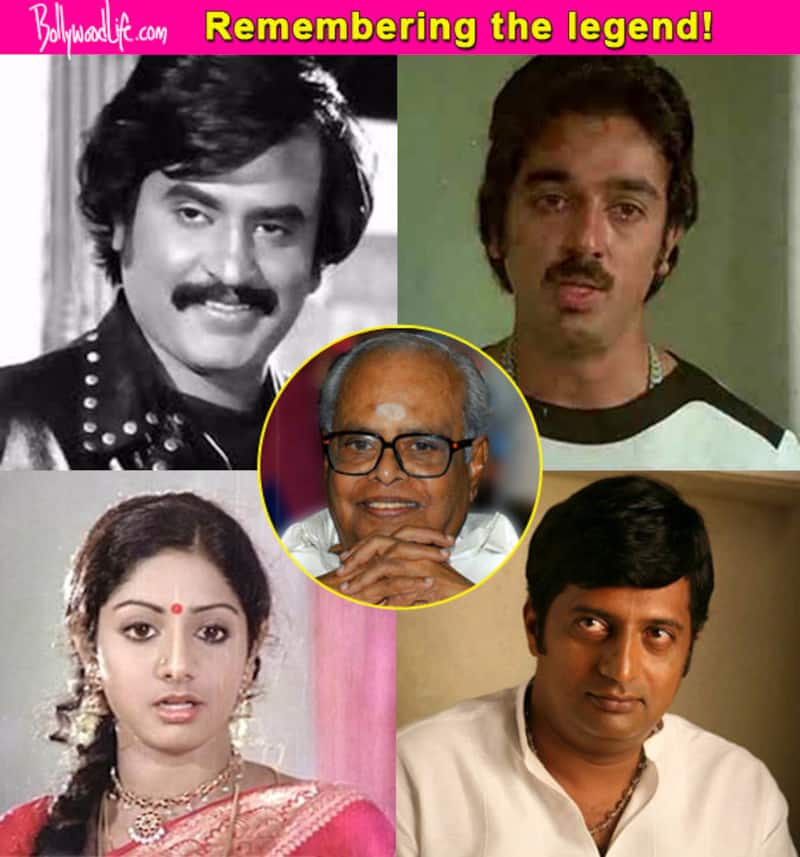 On the dreadful occasion of sad demise of 84 year old maverick filmmaker, we look back at his contributions to the world of cinema in the form of new faces he introduced, who went on to scale great heights of success

December 23, 2014 is black letter day in the history of Tamil cinema, as one of the most revered filmmaker of all time, K Balachander, took his last breath. The 84 year old veteran director was admitted in hospital last week in critical condition, drawing worrying lines on the foreheads of Tamil film celebrities. While the legendary director was said to be recovering from ailment a couple of days ago, his sudden demise has got the entire Kollywood to come standstill. Also Read - Shruti Haasan's PCOS and endometriosis, Shenaz Treasurywala's face blindness and more Bollywood actors who faced severe health issues

While the fans and Tamil film fraternity mourns the death of beloved KB sir, we bring you a list of five new faces introduced by K Balachander, who went on to become great stars in future: Also Read - Jawan MAJOR UPDATE: Shah Rukh Khan to play DOUBLE ROLE in Atlee film; Deepika Padukone, Nayanthara both set to romance SRK?

Before Rajinkanth became superstar, he was Shivaji Rao Gaikwad, a bus conductor in Bangalore. It was his interest in acting and K Balachander’s eye for talent, that Rajinikanth landed in films. In fact it was KB who gave him the first break as a cameo in his 1975 film Apoorva Ragangal. And the rest is history. Over the years, Rajini worked with Balachander umpteen number of times dishing out superhits like Thilu Mullu. If there was a mentor for Thalaivar, it has to be K Balachander. Also Read - Prithviraj Sukumaran keen to collaborate with Rajinikanth on the remake of THIS Malayalam movie

After having acted as child artist in handful of films, Kamal Haasan, who is now the most versatile actor in the industry, was given the big break by K Balachander when got to play the lead in his much acclaimed 1975 flick Apoorva Ragangal. Over the years, the two artists collaborated a number of times to churn out films like Maro Charitra, Varumai Niram Siggapu and many more.

At the tender age of 13, it was K Balachander who saw the potential in Sridevi and believed that the teenager could actually do justice to the pivotal role in his film Moondru Mudichi. It was this 1976 film, which led to the formation of KB’s favourite troika of actors – Kamal,Rajini and Sridevi as the three where cast together in numerous films. And over a period of time, Sridevi became the reigning queen of not only Tamil but also Hindi films. The English Vinglish actress owes a lot to the late maverick filmmaker.

Before creating a name for himself in Tamil cinema with critically acclaimed films like Iruvar and Kanchivaram, it was K Balachander who introduced Prakash Raj to Kollywood. After doing a string of cameos in Kannada and Telugu films, the talented actor was spotted by KB, who gave him a break in Tamil films with his flick Duet. Now, Prakash Raj is one of the most bankable charater artist in K-town.

Not many know that the veteran comedian Vivekh actually started his filmi career as script writer under K Balachander’s guidance. After assisting KB for nearly four years, Vivekh shared a close bond with the director, which led to Balachander offering him a role in his film Manathil Uridhi Vendum. It was through this film that Vivekh slowly established himself in the industry, transforming from a secondary artist to an ace comedian. If it was not for Balachander, a gem of a comedian like Vivekh would have gone unnoticed.