Recently, a troll targetted Rashmika Mandanna out of the blue, sharing a poster from the actress' upcoming Telugu movie, Aadaalloo Meeku Johaarlu, costarring Sharwanand, directed by Kishore Tirumala, and proceed to question how she keeps getting cast in lead roles

Rashmika Mandanna is by far one of the most popular actresses across multilingual film industries at the moment in the country. The gorgeous lass, who began with the moniker of 'Karnatak Crush', owing to her rapid rise in the Sandalwood film inddustry, quickly became christened as 'South Crush', after transcending that fame to Tamil and Telugu cinema, and is already relatively well known to the Bollywood audience, despite having yet to make her debut in Hindi movies (Mission Majnu and Goodbye are expected to release next year). Suffice it to say that Rashmika Mandanna is the next big thing in all of Indian cinema, truly displaying the potential to tap into that pan-India market. Also Read - Ahead of Pushpa trailer, Rashmika Mandanna surprises co-star Allu Arjun with special goodies

However, there'll always be the trolls who can't digest someone's accolades despite them having worked hard for it and with no less amount of talent. Recently, a troll targetted Rashmika Mandanna out of the blue, sharing a poster from the actress' upcoming Telugu movie, Aadaalloo Meeku Johaarlu, costarring Sharwanand, directed by Kishore Tirumala, and proceed to question how she keeps getting cast in lead roles. Also Read - Late actor Sidharth Shukla becomes the Most Searched Male Celeb of 2021; Shah Rukh Khan's son Aryan Khan among the Most Searched Personality – check full list

Now, Rashmika is accustomed to ignoring such trolls, but decided to make an exception for this particular one (something said troll wrote must've touched a nerve), and we're so glad she did. The Pushpa actress retorted by commenting, “Naa acting kosam,” accompanied by a few laugh emojis, and her response has won the internet. Following how well she trolled the troll and the onslaught of negative comments that followed by her fans against said troll, the tweet has since been deleted, but not before we captured a screenshot of the same for you. Check it out below: Also Read - Chiranjeevi, Ram Charan and Allu Arjun step in to help people affected due to floods in Andhra Pradesh, donate Rs. 25 lakh each 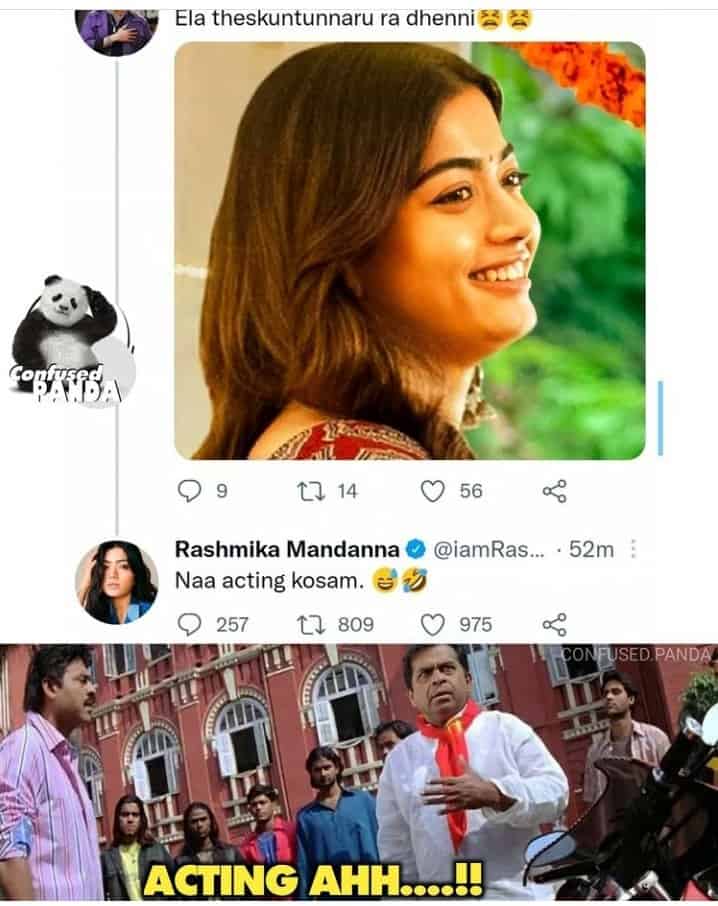