Amidst speculations about their relationship status. Rhea Chakraborty commented on Sushant's latest Instagram picture and we think it sums up the whole situation.

Over the last few days, the camaraderie between Sushant Singh Rajput and Rhea Chakraborty has been in the news after the rumoured couple spent few days together in Kashmir recently. Rhea and Sushant have been spotted often together lately and we all know what kinds of speculations would follow. And amidst all this, Rhea Chakraborty commented on Sushant's latest Instagram picture and we think it sums up the whole situation. Rhea commented "Fav" on Sushant Singh Rajput's B&W picture he posted on Instagram and the comments that followed are amazing. Fans are unsure now if there is something brewing between the two or if it was just a comment by a BFF. We don't know too! Check it out right here: Also Read - Rhea Chakraborty, Alia Bhatt, Disha Parmar and more celebs from Bollywood and Television industry were trolled this week – find out why 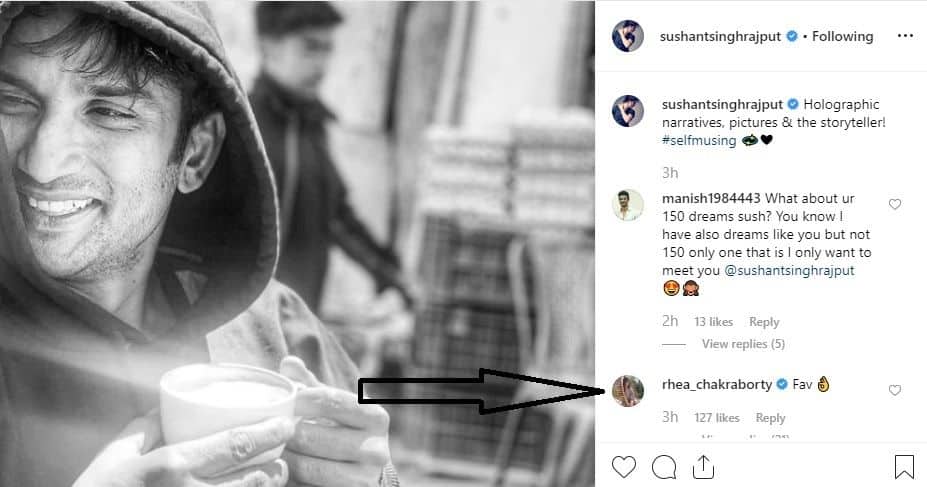 All these speculations about the special bonding between Sushant and Rhea began after the two were spotted in Kashmir on a holiday. Photos of the rumoured couple went viral on social media leading to speculations. And as always, the two are tight-lipped about their relationship status. Also Read - Bigg Boss 15: From Disha Vakani to Rhea Chakraborty – these celebs might lock horns in Salman Khan's controversial reality show

On the work front, Sushant will next be seen in Chichhore which is directed by Dangal fame Nitesh Tiwari. Touted to be a rom-com, Chichhore also stars Shraddha Kapoor while Varun Sharma, Prateik Babbar and Tahir Raj Bhasin will be seen in crucial roles. The film is slated to be released in August thi year which is yet to be confirmed by the makers.

Speaking about Rhea, the bubbly actress was last seen in Jalebi that also starred Varun Mitra and Digangana Suryavanshi in other lead roles. The film was a romantic tale and was directed by Pushpdeep Bharadwaj. Rhea would next be seen in Tamil film Dhanusu Raasi Neyargale and will be her debut in Kollywood.