Amid separation rumours, Priyanka Chopra left her fans stunned when she brutally roasted her husband Nick Jonas during 'The Jonas Brothers Family Roast' show. And guess what, south star Samantha Ruth Prabhu seems to be enjoying it a lot.

Amid separation rumours, Priyanka Chopra left her fans stunned when she brutally roasted her husband Nick Jonas during 'The Jonas Brothers Family Roast' show. And guess what, south star Samantha Ruth Prabhu seems to be enjoying it a lot. Also Read - Samantha Ruth Prabhu calls out trolls for their uncivilised behaviour: 'I don't demand unconditional acceptance'

In a short clip shared by Priyanka on her Instagram, The Matrix Resurrections star took a royal dig at Nick's acting career and needless to say it was quite over the top. She said that they constantly teach each other something. She said that while Nick has taught her how to use TikTok, she has taught him 'what a successful acting career looks like.' Also Read - Nick Jonas fixes Priyanka Chopra's outfit at the London Fashion Awards debunking divorce rumours; fans say, 'They are showing out all the haters'

"Nick and I have a 10-year age gap. There are many 90s pop culture references he doesn't understand and I have to explain it to him. He showed me how to use Tik Tok for example. You know, and I showed him what a successful acting career looks like,” Priyanka said. Also Read - Samantha Ruth Prabhu shares interesting update on Kaathu Vaakula Rendu Kaadhal with Nayanthara and it will make you applaud the two actresses

Nick couldn't help but hide his face with his hands while his brothers laughed out loud along with the audience. She then also roasted the Jonas brothers saying that they all 3 combined don't have the number of followers that she has on Instagram.

After Priyanka's roast video went viral on social media, Samantha took to her Instagram stories to share the post and wrote, 'Amazing' on it. Well, Samantha liked Priyanka's unabashedness for sure. 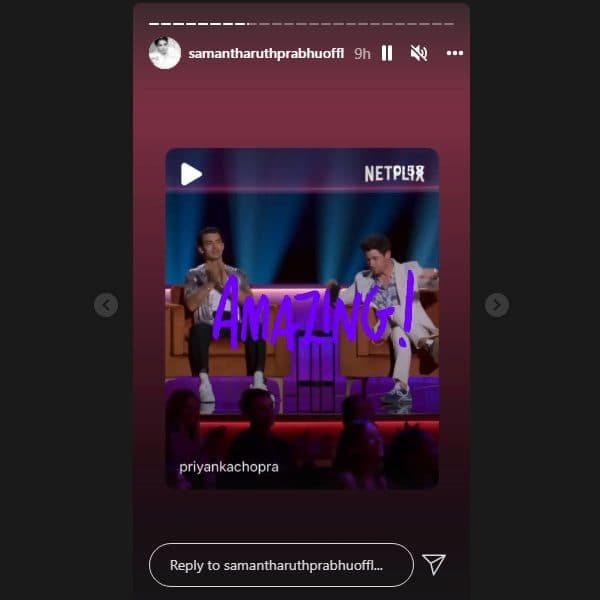 Hosted by Kenan Thompson, the first episode of the roast show showcased Kevin, Joe and Nick and their partners Danielle Jonas, Sophie Turner and Priyanka Chopra. Priyanka and Nick Jonas tied the knot in Rajasthan in 2018.