Ever since her divorce Samantha Ruth Prabhu has been sharing a lot of inspirational and motivating quotes on her social media account that shows she is on the way of healing and moving on!

Samantha Ruth Prabhu is right now the most judged celebrity as she has got separated from her husband Naga Chaitanya. Ever since her divorce Samantha has often been targeted on social media. She has been called names and what not? However, she doesn't give a damn! The actress often shares a post that hints that she is least bothered about these trolls and lives her life on her terms. The latest post of Samantha too talks about being a badass bitch. The actress shared a post where which speaks about a woman being badass no matter what. The post reads, " In 1954, Betty White was criticised after having Arthur Duncan, a black tap dancer, on her show. And due to that, her show was cancelled. Her reply to this criticism was sassy AF, " What can I say? I am one badass bitch". Clearly, Samantha is right now in that mood. Whatever she does she is judged for it, and she has learnt to royally ignore and live. Also Read - Trending Entertainment News Today: Sushmita Sen-Rohman Shawl meet after break-up, Alia Bhatt's Gangubai Kathiawadi new release date and more 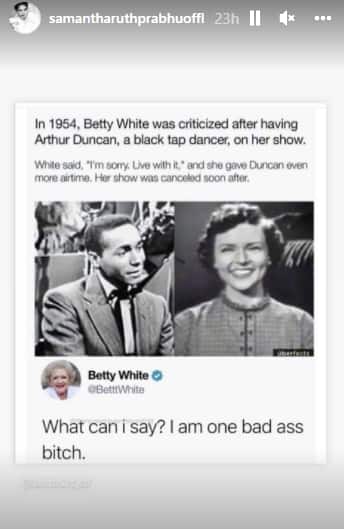 Recently Samantha gave it back to the troll who on Twitter called her a ' divorced second-hand item' and even accused her of robbing rupees 5o crore from a 'gentleman' referring to her ex-husband Naga Chaitanya. She replied to him in the classiest way possible, " Kamarali Dukandar God bless your soul". Also Read - Hooked to Allu Arjun's Srivalli, Saami Saami, etc? Pushpa lyricist Raqueeb Alam reveals why he finds it hard to work in Bollywood [Exclusive]

Her divorce announcement did leave her fans shocked. Making it official, Samantha had shared a statement that read, " We are fortunate to have a friendship of over a decade that was the very core of our relationship which we believe will always hold a special bond between us. We request our fans, well-wishers and the media to support us during this difficult time and give us the privacy we need to move on Thanking you for your support". Ever since her divorce Samantha has been sharing a lot of inspirational and motivating quotes on her social media account that shows she is on the way of healing and moving on!