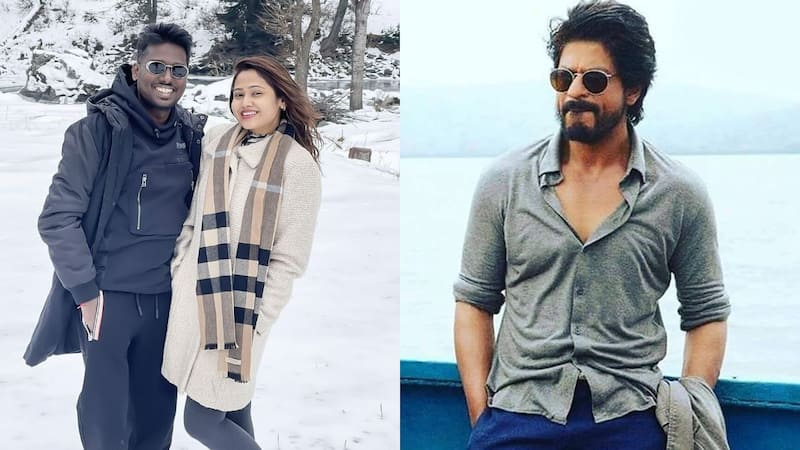 Shah Rukh Khan fans await his next movie with bated breath given his prolonged hiatus from the big screen – his longest ever, dating back to the time he entered the film industry, including Pathan, his net with Director Atlee, costarring Nayanthara, and then his film with Director Rajkumar Hirani. Coming to Atlee, the filmmaker's wife, Priya, recently shared an intimate picture with her husband on Instagram, where she can bee seen lying in bed, being hugged by Atlee and their pet dog, Becky. However, the couple's fans were left a tad disappointed as she turned off the comments option on her post, but can you blame her given how trolls wait for every little opportunity to spread filth? Anyway, check out adorable pic below: Also Read - Trending Entertainment News Today: Vivek Agnihotri takes a jibe at Besharam Rang, Sushant Singh Rajput eyes were punched claims hospital staff and more

Shah Rukh Khan has been absent from the big screen since 2018 – the longest his fans have ever had to wait to savour King Khan in a theatre. So, it goes without saying that even without a single promotional material or even a glimpse of Pathan, the superstar's next mega-budget movie, excitement for the movie has already reached a crescendo. Now even as we await for the first look of the next installment of YRF's spy universe, more exciting news has come our way for SRK fans as we've got to know some interesting updates about his forthcoming film with Director par excellence Atlee, costarring South's Lady Superstar Nayanthara. Also Read - Vivek Agnihotri RESPONDS to netizen who reminds him of his 'erotica' Hate Story amidst Besharam Rang controversy; says, 'I changed'

Word is that Shah Rukh Khan will be resuming and wrapping up Atlee's movie alongside Nayanthara in one straight schedule before his first time collaboration with Rajkumar Hirani goes on floors. As per a report in Mid-Day, SRK is expected to resume Atlee's film from February as soon as he's done shooting a few portions that are left of Pathan as also a bit of his cameo in Salman Khan and Katrina Kaif starrer Tiger 3. If you'll jog your memory back, then Shah Rukh had to cancel all his shoots since last November due to the unfortunate circumstances involving his son, Aryan Khan, after which there was further delay due to Omicron variant of the COVID-19 pandemic temporarily putting things on hold. Also Read - Bigg Boss 16: Archana Gautam deliberately throws hot water on Priyanka Chahar Choudhary in her fight with Vikas Manaktala; claim viewers

However, now, as per the Mid-Day report, King Khan will finish the reaming portions of Atlee's film in a stretch from February to March, after which he's expected to dive straight into his movie with another Director par excellence, Rajkumar Hirani.