Vijay Deverakonda's fan gets his portrait inked on her back, Bill Gates becomes a Mahesh Babu fan, Wrestler Sanga does the iconic Allu Arjun gesture, and more; here are all the trending South news today. 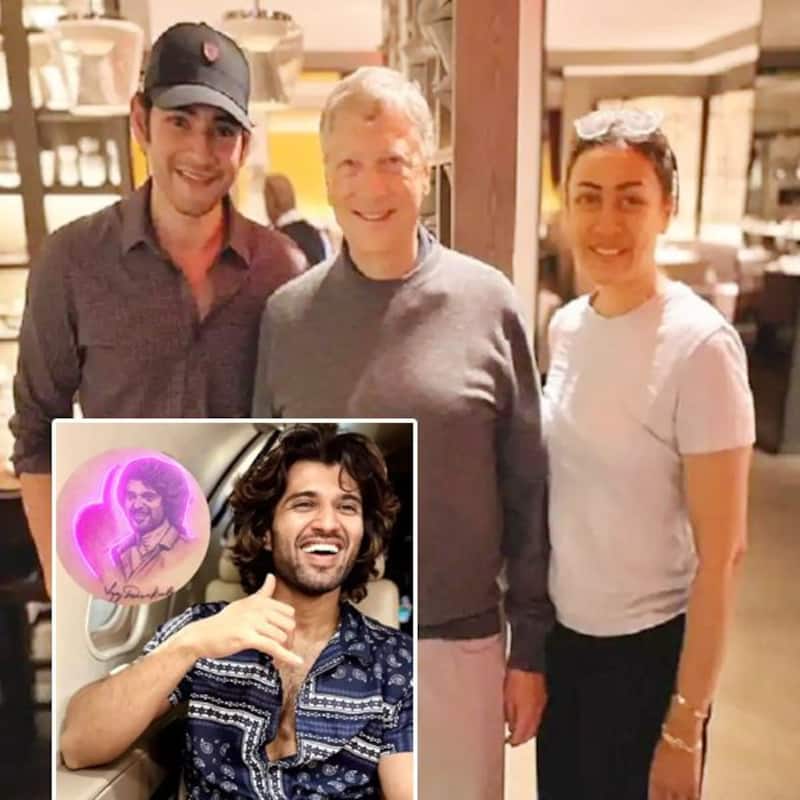 From Vijay Deverakonda's fan gets his portrait inked on her back, Bill Gates becomes a Mahesh Babu fan, Wrestler Sanga does the iconic Allu Arjun gesture, and more; here are all the trending South news today. You might have missed some important updates about your favourite star or his/her movies. But don’t worry as we are here with the round-up of what all happened in the South film industry today. Below is the list of trending South news… Also Read - Mahesh Babu to Kamal Haasan; 8 South Indian actors who have immense fan following worldwide

Vijay Deverakonda's fan gets his portrait inked on her back

Vijay Deverakonda who will next be seen in Liger met his super fan who has inked his portrait on her back. Vijay knew about the tattoo and she obliged to show the same in front of the cameras. Vijay asked her when she decided to get the tattoo done but Cherry was at a loss of words. Her expressions say it all. Vijay Deverakonda hugged them both and even posed for pictures. Read Also Read - Mahesh Babu OPENS Up about his film with SS Rajamouli; calls it a dream come true [Read Deets]

Mahesh Babu is right now vacationing in New York along with his wife Namrata Shirodkar and his kids. The actor bumped into Mr. Bill Gates and even shared a picture of meeting the richest man alive. He took to his Instagram and wrote, "Had the pleasure of meeting Mr. @BillGates! One of the greatest visionaries this world has seen... and yet the most humble! Truly an inspiration!!." Bill Gates, who was happy to meet Mahesh Babu, started following the Telugu star on social media and responded to his tweet. He wrote, "Being in New York is always fun – you never know who you’ll run into. It was great meeting you and Namrata!." Read Also Read - Liger star Vijay Deverakonda upset with his episode of Koffee With Karan 7? [Exclusive]

Allu Arjun and Rashmika Mandanna starrer Pushpa's fever has reached the wrestling ring. Wrestler Sanga recently did the iconic ‘Jhukega Nahi Sala’ gesture of Pushpa during a fight. Allu Arjun’s fans and fan clubs have been sharing the video of the same and it has gone viral on social media. Read

It was in 2018 that Tollywood actress Sri Reddy sat topless in front of the Telugu Film Chamber protesting against the existence of the casting couch in the industry. Later, Ram Charan had given out his reaction too. During his appearance on CNN's Now Showing, Ram Charan stated that it is scary to hear about the casting couch as he has almost 5 sisters in the same field. The RRR actor was then quoted saying, "I am not talking particularly about her (Sri Reddy). But overall, to hear this word anywhere, in any industry — whether in politics or business industry — doesn’t sound right to anyone. Nobody would encourage it, especially when I have five of my sisters in the same field, I would personally not want to pursue it or witness such a disaster in the industry." Read

Animal: Rashmika Mandanna reveals she got Ranbir Kapoor starrer because of her act in THIS blockbuster film

Rashmika Mandanna has been cast opposite Ranbir Kapoor in Arjun Reddy fame Sandeep Reddy Vanga's upcoming Bollywood biggie Animal and they have been having a great time shooting for the film together. "The makers of Animal approached me for the film after they saw my performance in Pushpa. I did not think twice before saying yes to the film because I was confident that the audience would get to enjoy a new side of me," Rashmika told IANS. Read