Son of Tamil superstars Suriya and Jyothika, Dev has made his parents proud as he won the national Karate championship Zen Isshinryu, which was held in New Delhi. The couple were present at the venue and cheered for all 40 participants from Tamil Nadu. Needless to say, the parents were super happy after the win of their talented child. Also Read - Trending South News Today: RRR themed restaurant, R Madhavan trolled for comment on ISRO's Mars Mission and more 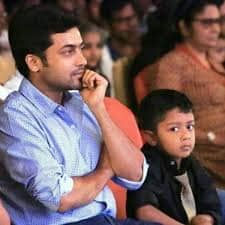 On the work front, Suriya is currently shooting for Kaappaan, the film is directed by KV Anand and also stars Arya, Mohanlal, Boman Hirani and Samuthirakani in key roles. The music of the film is composed by Harris Jayaraj, while it is bankrolled by Lyca Productions, who recently produced Rajinikanth's mega-budget venture 2.0. Kaappaan is expected to hit the screens in October this year. Also Read - Kartik Aaryan’s McLaren Gt, Vikram director Lokesh Kanagaraj’s luxury car and more celebs who received expensive gifts

Meanwhile, Suriya will be next seen in NGK (Nanda Gopalan Kumaran). It is directed by Dhanush's elder brother Selvaraghavan and is bankrolled by Dream Warrior Pictures. The music of the film is composed by Yuvan Shankar Raja, while the cinematography is done by Sivakumar Vijayan. The film was supposed to release last year but due to technical issues, it was delayed. NGK stars Sai Pallavi and Rakul Preet in key roles and is scheduled to hit the screens on May 31.

On the other hand, Jyothika is currently juggling between several projects. She recently came on board for an untitled Tamil film, which also stars Karthi in a lead role. Directed by Jeethu Joseph, the film has gone on floors today. Reportedly, both the stars will play siblings in the film. For more news and updates from the South, stay tuned to BollywoodLife.