Tamil actor Vishal and Anisha to get hitched on THIS date? Here's what we know

There were speculations that Vishal and Anisha will tie the knot in May after the actor's upcoming film Ayogya releases. 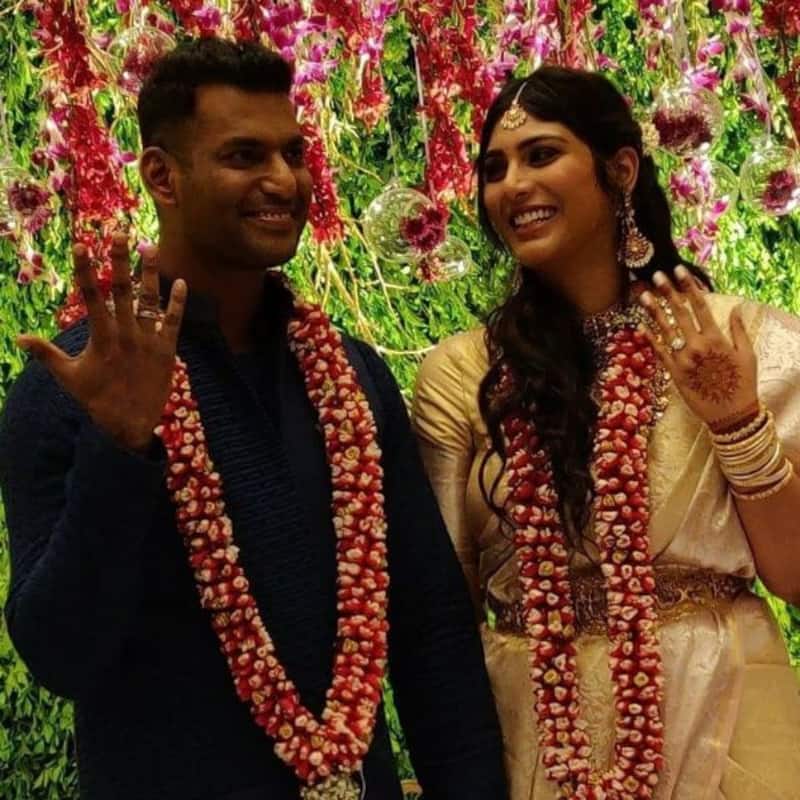 Tamil actor-producer Vishal got engaged to his long time girlfriend Anisha Alla in Hyderabad earlier this year. The couple announced their relationship via social media which came as a surprise to fans of the actor. And after few weeks, Vishal and Anishal got engaged in a private ceremony in Hyderabad which was attended by the couple's family and close friends. The families are yet to finalise the date of wedding and have been considering many dates. There were speculations that Vishal and Anisha will tie the knot in May after the actor's upcoming film Ayogya releases. However, it did not happen. The latest we hear is that the wedding may take place in October. News has it that Vishal and Anisha will get hitched on October 9 which is yet to be officially confirmed. Going by the buzz, this date seems to be the most likely D Day for the couple. Also Read - Nayanthara, Samantha Ruth Prabhu, Anushka Shetty and more South Indian actresses who are multi-talented

Yes.. happy. Too happy. Happiest. Her name s #AnishaAlla. And yes she said yes. And it’s confirmed. My next biggest transition in life.????❤️❤️❤️??? will be announcing the date soon. God bless. pic.twitter.com/NNF7W66T2h

Speaking about the going-to-be-bride, Anisha hails from a business family in Hyderabad and has acted in couple of feature films. Anisha has appeared in Pellichoopulu and Arjun Reddy and was seen playing a supporting role. Coincidentally, both these films had Vijay Deverakonda in the lead role and fans found this very interesting. Also Read - Thiruchitrambalam movie review: Dhanush fans hail his middle-class act; call it 'breath of fresh air amidst mass, action, thriller movies'

Vishal, on the other hand, is gearing up for the release of Ayogya which is the Tamil remake of Telugu hit film Temper. The original starred Jr NTR in the lead role and was directed by Puri Jagannadh. Ayogya stars Raashi Khanna in the female lead role. The remake was slated to be released today, May 10, but couldn't due to unknown reasons. The latest news is that Ayogya is all set to release tomorrow, May 11 after it received clearance from TFPC. Also Read - Thank You: Naga Chaitanya's massive FLOP to have its OTT release on THIS date and platform after being booted out of theatres in no time