In the message, Chiranjeevi had turned emotional and suggested to his friends that they should take a trip together for a week and catch up on.

We have been living the unwanted and unfathomable nightmare it seems. Firstly, COVID-19, lockdown, cyclone Amphan, Cyclone Nisarga, Uttarakhand wildfire, Aurangabad tragedy, Baghjan oil leak and the demise of TV and film actor in just last 4 months. So many things happened that it all feels like someone has opened a door to hell by mistake and knows not how to close it. On 7th June 2020, the whole South industry and the country were in for yet another worst shock when actor Chiranjeevi Sarja's untimely demise news surfaced. The actor was just 39 and suffered a cardiac arrest which cost him his life. Also Read - On Chiranjeevi Sarja's first death anniversary, this is how Meghana Raj, uncle Arjun Sarja remembered him

And now, days after his shocking death, people are still not able to come to terms with the fact that Chiranjeevi Sarja is no more. His family and friends are in denial that such a thing could happen to him. A friend of Sarja's shared a screenshot of the Samhaara actor's last message on Whatsapp to his friends. In the message, Chiranjeevi had turned emotional and suggested to his friends that they should take a trip together for a week and catch up on. Here's the snapshot shared by Prajwal Devaraj on his social media handle: Also Read - Meghana Raj bids adieu to her pet Bruno with an emotional post; says, 'I'm sure you are with Chiru' 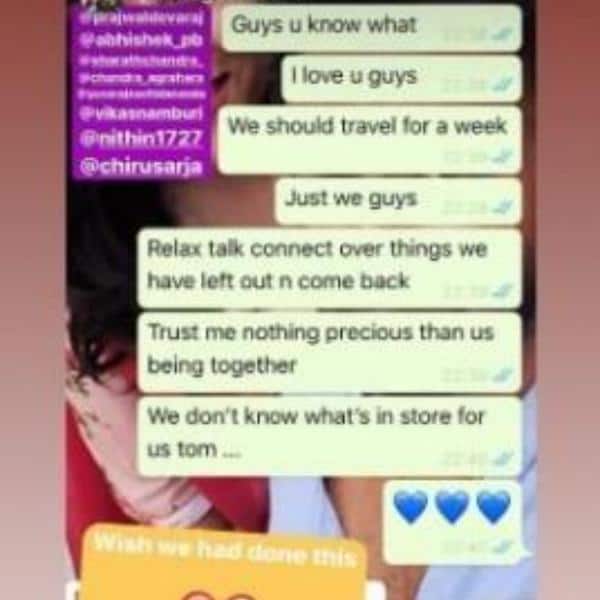 It certainly is heartbreaking with the fact that his wife, Meghana Raj is in her second trimester. His last rites were performed on Monday at his farmhouse in Kanakpura and his wife broke down and hugged his body while grieving. Chiranjeevi hailed from a well-known film family. His grandfather was Shakti Prasad while Arjun Sarja is his uncle. His brother, Dhruva and cousin Aishwarya Arjun are actors as well. Also Read - Late Chiranjeevi Sarja's son, Jr. Chiru cannot get enough of his dad's photo and it will leave you emotional – watch video

About 26 people from or related to TV and Film industry passed away in the recent past. And we are not exaggerating. Chiranjeevi's funeral was attended by many industry people like Kichha Sudeep, Rashamika Mandanna, Yash, Radhika Pandit and others.